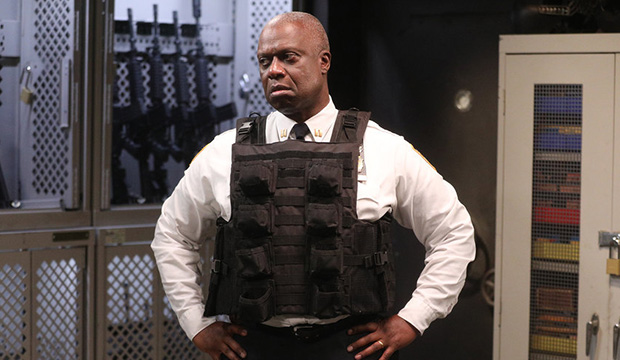 After being snubbed the past three years, Andre Braugher landed his fourth Emmy nomination for “Brooklyn Nine-Nine” in July. He’s once again up for Best Comedy Supporting Actor, for which he submitted the 12th episode of the seventh season, “Ransom.”

The actor revealed to Gold Derby last month that he chose to submit “Ransom” because “it was a funny episode and showed off the badass aspect to Captain Holt he usually keeps under wraps.”

In the episode, Holt recruits Jake (Andy Samberg) to find his dognapped Cheddar. Holt is worried and angry about losing his “fluffy boy.” A few scenes later, Holt is snapping at Jake and loses it on a call with the dognapper. This results in them not being able to trace the call.

The next time we see Holt, he is talking about getting even while stocking up on grenades. In their next scene, Jake informs Holt of a lead. “That’s weird. It’s sunny outside because a sh–storm is about to rain down on that punk,” the captain says. It then cuts them finding a dead end, and Holt screams and punches a hole in the wall.

When the dognapper demands that the ransom be paid by Holt’s husband Kevin (Marc Evan Jackson), Jake assumes his identity. This leads to a montage of the couple teaching Jake to be more refined and proper. Next, while keeping watch, Holt loses Jake but is reunited with Cheddar.

In the final sequence of the episode, Holt tracks down the dognapper. To save Jake, he jumps on the roof of a speeding car, gets up and enters a fistfight. “You took the wrong fluffy boy!” he screams. Having saved Jake, the episode ends with Holt saying, “Relax, that wasn’t even the coolest thing I’ve ever done.”

Braugher is the star in this episode and gets to display his range. He is the hero and gets to be badass in an episode that ought to stick in voters’ minds. As the actor himself told us, “[Holt is] typically a very composed and taciturn character. This was an opportunity to get emotionally involved. He gets to be wild and emotional and gets to have a fist fight in the street over his ‘fluffy boy.’ It was more fun than what I’ve had in a long time.”

Emmy oters love Andre Bruagher, whose career nomination total now stands at 11. actor’s 11th. He won a Best Drama Actor Emmy in 1998 for his work on the NBC gritty police drama “Homicide: Life of the Street” and nabbed a second trophy for the miniseries “Thief” in 2006.

“Brooklyn Nine-Nine” has unfortunately underperformed at the Emmys. It has never been shortlisted for comedy series and has only managed to win awards for stunt coordination. The acting branch hasn’t ever recognized anyone else from the regular cast.

Braugher is in a competitive field, against actors from comedy series contenders. This includes last year’s champ Tony Shalhoub from “The Marvelous Mrs. Maisel” and front-runner Dan Levy (“Schitt’s Creek”).