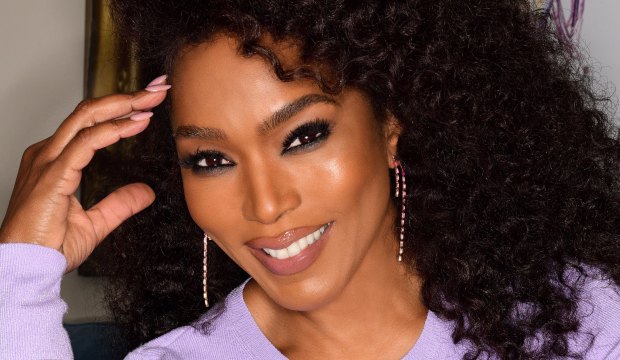 After five previous Emmy nominations, Angela Bassett has two opportunities to score the first Emmy win of her career. One of those opportunities is in the Best Comedy Guest Actress category where she is up for her guest spot on HBO’s “A Black Lady Sketch Show.” Bassett is nominated for playing Mo in one of the sketches from the show’s first episode, entitled “Angela Bassett is the Baddest Bitch.”

Bassett’s sketch takes place during a support group meeting for self-described “bad bitches.” The sketch opens with the group discussing how they don’t let their men see them without makeup on. Bassett then appears as Mo, the head of the support group, countering that she feels the baddest when her man is worshiping her natural face. This causes another member of the group, Mya (Gabrielle Dennis) to wish she didn’t have to be a bad bitch all the time. She wonders if she could just be an “okay bitch,” who wears normal house slippers instead of three-inch heels.

Mo asks where Mya got this crazy idea, and Mya confesses that she saw a woman walking down the street without lashes on. Mo then rallies the group with her wisdom by saying, “There’s nothing wrong with being an okay bitch … as long as you’re not a basic bitch.”

It’s revealed that the support group is actually a focus group for Fashion Nova. A woman secretly observing says they’ll go out of business if women start rejecting impossible beauty standards and yells, which all the attendees hear. Mo touches a hidden earpiece and asks the observers if everything is alright. When they say it is, Mo covers for them by saying that the sound must have been “some kickball bitches next door.”

Could this finally earn Bassett a trip to the winner’s circle? Below are some of the pros and cons.

She may only have a few lines in a sketch that’s just over three minutes long, but Bassett fits perfectly into the role of Mo and carries herself with all the confidence you would expect of someone who leads a support group for bad bitches.

Bassett is one of those actresses who is universally beloved but has never gotten the proper recognition for it, and that could give her an edge if enough voters are aware she hasn’t won an Emmy yet. The fact that she’s a double nominee this year (she’s also up for Best Narrator for “The Imagineering Story”) could also work in her favor like it did with Patricia Arquette (“Escape at Dannemora” and “The Act”) last year and both Alex Borstein (“Marvelous Mrs. Maisel” and “Family Guy”) and Jeff Daniels (“The Looming Tower” and “Godless”) in 2018.

A short amount of screen time hasn’t hurt previous winners in the guest acting categories. Cherry Jones triumphed last year in Best Drama Guest Actress for a brief appearance in “The Handmaid’s Tale,” and Margo Martindale was able to claim back-to-back Emmys for episodes of “The Americans” in which she was on screen for less than two minutes each.

As effective as Bassett is in the sketch, some voters could feel like there’s not much of a performance for her to give since her role only comes with a few lines.

If some of the voters are not familiar with the term “bad bitches,” they might feel turned off by the premise of the sketch and not give it a fair shake.