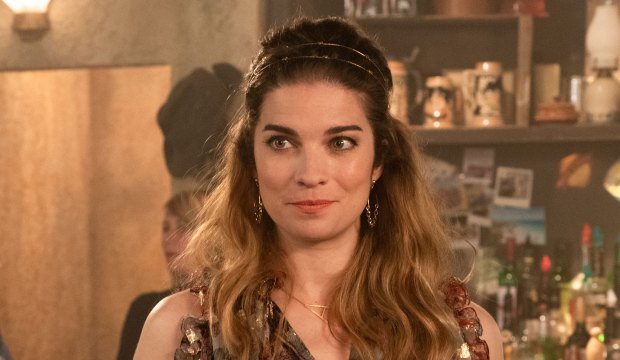 Ew, David! It took until the sixth and final season of Pop TV’s “Schitt’s Creek” for Annie Murphy to finally score an Emmy nomination for Best Comedy Supporting Actress. Murphy’s character Alexis has come a long way on the series since her vapid beginnings. In the hopes of showcasing her comedic timing and the emotional growth of her character, Murphy has chosen the episode “The Presidential Suite” as her submission to Emmy judges.

In this episode, Ted (Dustin Milligan) returns to Schitt’s Creek for a long weekend (cut short by bad milk) and surprises Alexis at the motel. He informs Alexis that he was offered a job as a permanent research team member in the Galapagos, which throws a wrench into their relationship. Alexis heads to the cafe and relives the moment when she and Ted first met. She has a heart to heart with Twyla (Sarah Levy) over a smoothie, and weighs whether she should leave everything behind and go live with the love of her life. “I did that with Harry Styles in England,” admits Alexis, “and it was like, too rainy.”

Alexis closes down the cafe for a private dinner with Ted. She informs him she can’t ask him to move back and give up his dream job, but she also can’t move to the Galapagos and abandon her own career. “I’d like to think that we helped each other get here,” she says of their individual successes. The two share a bittersweet final evening together, knowing that they must say goodbye despite still being in love.

Will this performance win Murphy an Emmy? Let’s look at the pros and cons of this submission.

Murphy’s performance in the episode embodies the delicate mix of comedy and heart that viewers love from “Schitt’s Creek.” The breakup is heartbreaking, and Murphy plays it with a mature sensibility that Alexis would not have been capable of back in Season 1. Yet the actress is still able to land hysterical lines amid the tragic scenario such as, “You’re starting to sound like me trying to end things with B-Rok on the Backstreet Boys Millennium Tour.” The actress expertly balances comedy and pathos.

Many pundits see last year’s winner, Alex Borstein, as Murphy’s biggest competition for the Emmy. But Borstein is nominated alongside her “The Marvelous Mrs. Maisel” co-star Marin Hinkle, which could result in enough vote-splitting for Murphy to capitalize; she’s the only “Schitt’s Creek” nominee in this category and the show really hit the zeitgeist this year, earning 15 nominations overall. And the 2020 Emmy nominations featured a ton of first time nominees, so this hipper TV academy may opt to go with a fresh face over a past winner.

The first half of the episode is dominated by the antics of Moira (Catherine O’Hara) and Johnny (Eugene Levy), as Moira begs her husband for a weekend getaway in the upscale presidential suite of the newest Rosebud Motel location. Other nominees in this category have submissions that get to their best material quicker.