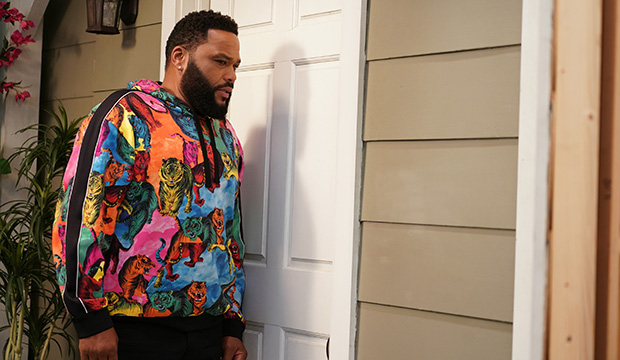 Anthony Anderson is now on his sixth acting Emmy nomination for his performance as Andre Johnson in “Black-ish,” but he has yet to win. The actor has nine nominations overall, earning three more because of his producing credit when “Black-ish” was nominated for Best Comedy Series. For his Best Comedy Actor submission to Emmy voters, Anderson has chosen “Love, Boat,” the Season 6 finale of the ABC sitcom.

In “Love, Boat,” Dre walks in on his previously separated parents, Ruby (Jenifer Lewis) and Pops (Laurence Fishburne) making love, which utterly stuns him. He is forced to grapple with the idea of his parents getting back together and trusting his father to not hurt his mother again, as he did in Dre’s childhood. Dre gives his mother an ultimatum: either she break up with Pops or move out of the house entirely. He later sees them off on a boat, letting go of his fears of history repeating. Can Anderson finally win an Emmy with this episode? Let’s weigh the pros and cons.

The biggest factor that could help Anderson is an overdue narrative. He is now one bid away from tying John Goodman, Matt LeBlanc and Hal Linden for the most nominated actors in this category without winning. With the Black Lives Matter movement at the national forefront and the larger populace actually acknowledging the structural racism that “Black-ish” has been talking about since it began in 2014, voters may feel like it is time to finally reward an actor like Anderson, who has put in the work for years but has not been given his big moment in the sun.

“Love, Boat” is also a great submission for Anderson due to the growth his character experiences in just 22 minutes. It is both laugh-out-loud funny and emotional as Dre struggles to cope with his parents’ changing relationship. Because voters trend towards openly funny material in the comedy races, Anderson automatically has the benefit of giving one of the most broadly comedic performances in his category.

If there were ever a real chance for Anderson, it was probably when “Black-ish” was nominated for Best Comedy Series from 2016-18. “Black-ish” simply isn’t in that upper echelon with voters anymore, and they tend to reward actors in shows they love enough to nominate in the top series category. While “Black-ish” did get three other nominations, it is statistically more difficult for shows to win Emmys after they reach a certain age.

When you have competition like Ted Danson (“The Good Place”), Michael Douglas (“The Kominsky Method”) and Eugene Levy (“Schitt’s Creek”), all with shows nominated for Best Comedy Series, plus Golden Globe winner Ramy Youssef (“Ramy”) in the mix, it may be an uphill battle for Anderson. Voters have passed over Anderson for each of the first five seasons so it is unfortunately easy to imagine them doing the same this year.