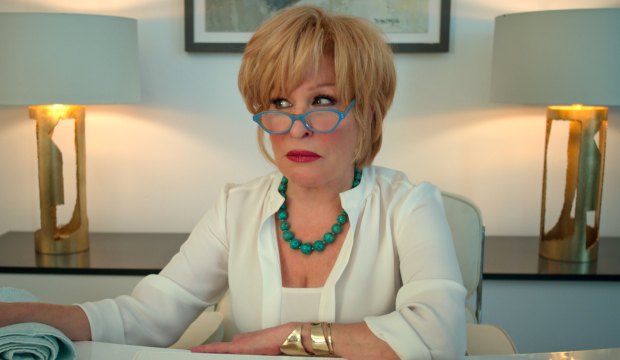 Third time’s the charm? After 22 years since her most recent acting nomination at the Primetime Emmys, Bette Midler returns for what is only her third shot at an acting win: Best Comedy Guest Actress as the sharp-tongued political chief of staff Hadassah Gold in “The Politician.” Should Midler prevail, it would be her fourth overall Emmy win, but her first for acting, all thanks to a scene-stealing turn in the season one finale episode “Vienna.”

While almost all of “The Politician” season one takes place during the high school years of Payton Hobart (Ben Platt), the finale episode “Vienna” jumps ahead three years to his life in New York as he begins a campaign to unseat long-time state senator Dede Standish (Judith Light). Midler is in the mix as Standish’s chief of staff, a door-opening and deal-making mouthpiece for the respected politician.

Among Midler’s episode-stealing scenes is her first where she is blocked from a meeting by a U.S. senator’s aide. Here she gets to show off her comedy chops in a short, quick-lipped monologue where Hadassah threatens the aide’s job for not letting a “sassy, brassy, wise old broad like [herself]” in. It’s the “sassy” and “brassy” that Midler goes on to showcase throughout the episode.

Can Midler’s promise to “play that card” as Hadassah earn her a fourth overall and first acting win at the Emmys when the Creative Arts awards are handed out in September? Below we take a look at the pros and cons of Midler’s candidacy.

Midler is already a three-time Emmy winner, all in the variety field, for “Bette Midler: Ol’ Red Hair Is Back” (1978), “The Tonight Show Starring Johnny Carson” (1992) and “Bette Midler in Concert: Diva Las Vegas” (1997). She was also previously nominated for acting in “Gypsy” (1994) and “Murphy Brown” (1998), but has yet to be recognized for the portrayal of a fictional character. This is the academy’s chance to acknowledge Midler’s accomplished career as a comedic actress.

“The Politician” creators Ryan Murphy and Brad Falchuk have a history of Emmy winning characters. The two creative minds are behind the shows that gave Billy Porter (“Pose”); Darren Criss (“The Assassination of Gianni Versace”); and Courtney B. Vance, Sarah Paulson, and Sterling K. Brown (“The People v. O.J. Simpson”) their Emmy wins in just the last five years, not to mention Gwyneth Paltrow (“Glee”) in this very category in 2011.

The role of Hadassah Gold has been greatly expanded in the already-aired second season of “The Politician.” On top of the multiple witty monologues Midler gets in “Vienna,” she now has a whole second season of material that voters and fans of the show will be familiar with, adding rich context to her already compelling guest performance in season one.

“The Politician” is relegated entirely to Creative Arts categories in its five nominations. Midler was the only actor recognized on top of the show’s four other craft nominations for its contemporary costumes, hairstyling, and makeup as well as its main title design. That may suggest limited support for the series overall compared to the other nominees in this category, all of whom are in shows that received top program nominations.