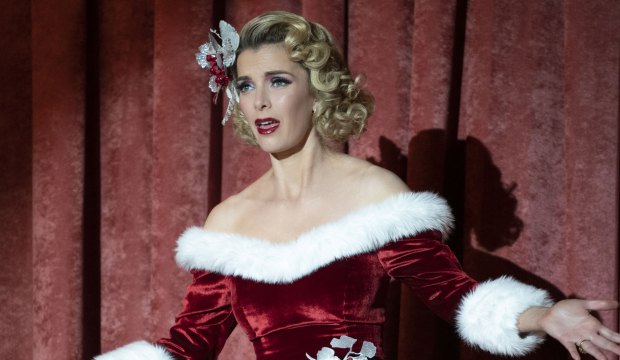 Betty Gilpin just earned her third Emmy nomination in a row for her performance as Debbie Eagan in “GLOW.” Once again, she is the only actor from the Netflix comedy to earn recognition from the TV academy. This year Gilpin submitted the climactic season three finale, “A Very GLOW Christmas,” to Emmy voters for consideration.

In “A Very GLOW Christmas,” Debbie realizes her boyfriend Tex (Toby Huss) doesn’t necessarily want her as a work partner, but rather as a companion to bring to business dinners. She proceeds to work with Bash (Chris Lowell), in-between the GLOW staging of “A Christmas Carol,” to have him outbid Tex for a TV station, all while clad in a fabulous Santa outfit. The actress gracefully navigates a scene in which Bash reveals his feelings for a man; Debbie later assures him of her ability to keep his secret. And she is instrumental in the final sequence of the episode, where she breathlessly tries to convince Ruth (Alison Brie) to direct a new wrestling show for the TV station.

Can Gilpin finally win on her third Emmy nomination? Let’s weigh the pros and cons.

Gilpin keeps getting nominated, so there is clearly a passion for her as a performer. Her nominations cannot necessarily be chalked up to love for “GLOW,” considering the show earned 10 bids in its first season, four in its second and now three in its third, so the actors branch clearly has affection for her in particular.

She is also strong in her episode, balancing the comedic and dramatic elements of her character and thus demonstrating her range. This is exemplified in the scene where she tries to convince Bash to buy the TV station backstage and then seamlessly slips into her “Liberty Belle” persona’s accent onstage. And she leaves the viewer on a high note in the episode’s final scene, capturing Debbie’s desperation.

While the love for Gilpin remains strong among Emmy voters, the fading love for “GLOW” as a series as a whole might hurt her. She’s in a category where each of the other seven nominees has their show nominated for either Best Comedy Series or Best Variety Sketch Series (in the case of “Saturday Night Live”), indicating greater overall support for those shows.

Gilpin is giving one of the most dramatic performances in this lineup as well. Voters have gotten used to rewarding more nuanced performers in the comedy categories lately, but they have stayed very laugh-oriented in Comedy Supporting Actress.

Kirsten Dunst on working with Jane Campion on 'The Power of the Dog': 'Every movie is like a new house'…