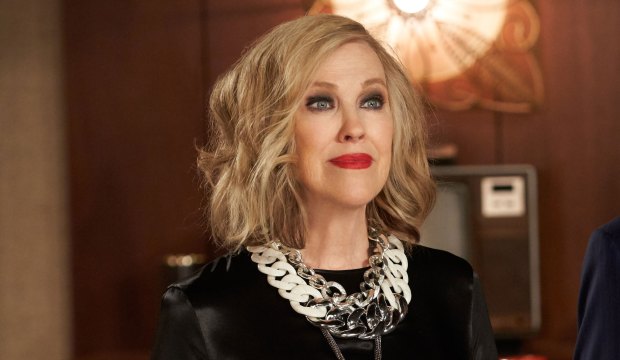 Catherine O’Hara has somehow never won an Emmy for acting. That all could change this year thanks to the final season of Pop TV’s “Schitt’s Creek.” This year marks the second time in a row that the performer is nominated for her iconic turn as self-absorbed soap actress Moira Rose. In the hopes of finally nabbing an acting win, O’Hara has submitted the Season 6 episode “The Incident” for Emmy consideration.

In this episode, David (Dan Levy) wakes up horrified to discover he has wet the bed. He is especially embarrassed to have had such an accident next to his sleeping fiance, Patrick (Noah Reid). Meanwhile, Moira has been tasked with a social media takeover to build anticipation for her film “The Crows Have Eyes 3: The Crowening.” After Alexis (Annie Murphy) shows her the basics, Moira is thrilled to have a “digital soap box” from which to speak to fans.

Moira struts into Rose Apothecary to showcase the store to her internet “frands” (fans plus friends, naturally) on a live stream. It’s here that she hears of David’s nocturnal accident, hilariously lamenting, “David, don’t tell me you’ve had a nighttime oopsy daisy.” In his youth, excitement and anticipation provoked his bed-wetting, and now it seems his upcoming wedding is having a similar effect. Alexis later storms into Moira’s Jazzagals rehearsal to inform her mother that she streamed the entire “oopsy daisy” conversation to her followers. Moira has generated a viral sensation, though not the one she intended.

Let’s take a look at the pros and cons of this submission.

This episode features some amazing one liners from Moira. After getting five likes on a social media post, she declares, “Alexis, I think you and I might need to purchase antibiotics. I believe we’ve just gone viral.” O’Hara is brilliant at selling these gems. She can deliver the line as a throwaway and still make it so funny that you want to rewind to hear it again. Her expert line delivery and bizarre pronunciations are reasons why this character has been so widely embraced.

All four members of the Rose clan are Emmy-nominated. If voters are watching episode submissions for all acting categories, O’Hara has a great acting showcase across all four episodes. “The Incident” provides her a classic fish-out-of-water comedic setup as Moira stumbles through social media usage for the first time. Other submissions allow her to showcase a zanier side (Murphy’s submission “The Presidential Suite”) and her emotional core (Levy’s “Happy Ending”).

Moira’s storyline is secondary to David and Patrick’s arc in this episode. The actress had other episodes this season that give her more screen time, and when going up against leads who dominate their series, like Rachel Brosnahan (“The Marvelous Mrs. Maisel”) and Issa Rae (“Insecure”), a comparative lack of scenes could hurt O’Hara’s chances.

O’Hara’s last scene of the episode occurs in the diner, as Moira and Alexis inform Patrick of the viral post about David. Murphy and Reid receive some of the funniest dialogue in this sequence, as this exchange lacks many of Moira’s signature bizarre antics. The episode finishes with David and Patrick in bed, which solidifies this installment’s focus on David over Moira.