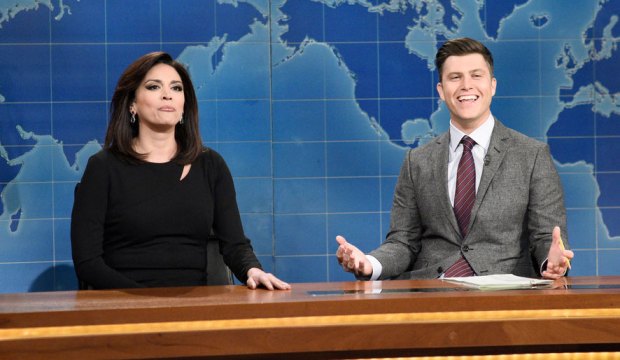 Cecily Strong has always been one of the clutch players on “Saturday Night Live” since she debuted on the series in 2012, but now she is finally getting the credit many have felt she deserves. She just earned her first-ever Emmy nomination this year, getting in alongside her castmate Kate McKinnon in Best Comedy Supporting Actress. Strong submitted the Eddie Murphy episode of the NBC sketch comedy for Emmy consideration, and that episode finds the actress doing some of her best-known impressions.

Strong memorably shows up during the Democratic debate cold open as Sen. Tulsi Gabbard, cackling villainously as she plots a takeover. She also appears as a contestant on “Holiday Baking Championship,” deeply ashamed of the highly inaccurate cake she tried to model off of Elsa from “Frozen.” She appears in the final sketch of the night as an elf in Santa’s workshop who has quite a conspiracy theory about her boss. Most memorably, she reprises her role as Fox News anchor Jeanine Pirro during Weekend Update, raving about impeachment in between spilling and vomiting up wine.

Will Strong succeed on her first try at the Emmys? Let’s weigh the pros and cons.

Strong may not be in every sketch of her submission, but she absolutely excels with what she is given. Her go-for-broke performance as Pirro has arguably become her most famous impression, projecting as loud as she can and slurring her words while never missing a beat. She also brings a hilarious menace to Sen. Gabbard, with a sly smirk on her face. Even in smaller roles in the “Holiday Baking Championship” and Santa’s workshop sketches she brings a uniquely committed and varied energy that shows off her comedic range. She is also featured quite a bit in McKinnon’s submission, the Daniel Craig episode, which could give her a boost.

The TV academy’s actors branch continues to love “SNL,” showering it with eight acting nominations this year, the most of any comedy series. While McKinnon is also in Strong’s category, voters may feel that they have duly awarded her with her wins in 2016 and 2017 and want to instead honor the actress who has helped carry “SNL” over the past decade right alongside her.

It took Strong a long time to get this Emmy nomination, even with Best Comedy Supporting Actress ballooning up to seven or eight nominees a couple of times in recent years. So she may not have as much academy support as category mainstays like McKinnon and Alex Borstein (“The Marvelous Mrs. Maisel”). And with McKinnon being the only regular “SNL” cast member to win an Emmy in the modern era, it might be a bit of an uphill battle for Strong.

Some may feel that Strong doesn’t get enough screen time in her episode. The show does give her a big standout moment as Pirro, but her appearance as Sen. Gabbard is brief and her other characters in the episode aren’t central to their sketches.