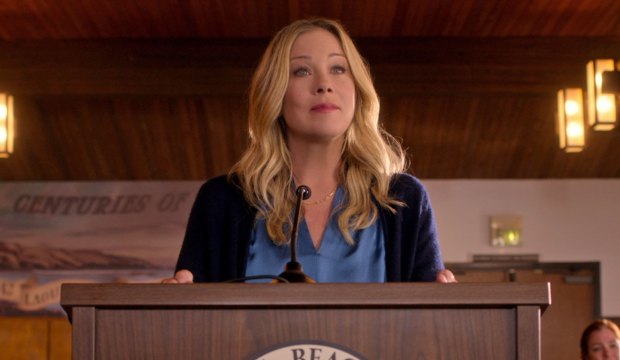 “There’s something I have to confess,” Christina Applegate’s Jen Harding shockingly declares in the climactic final seconds of “It’s Not You, It’s Me,” the penultimate Season 2 episode of Netflix’s comedy “Dead to Me” that Applegate has submitted for Emmy Awards consideration. After scoring a somewhat unexpected nomination last year for her turn as a grief-stricken yet delightfully snarky widow, Applegate returns to the Best Comedy Lead Actress line-up this year to try to win the second Emmy of her career.

“It’s Not You, It’s Me” opens as Jen wakes up next to Ben Wood (James Marsden), feeling shocked and instantly remorseful. After she painstakingly pushes Ben away, Jen channels her vulnerability into strength and defiance, and the episode chronicles her day as Jen takes over a city council meeting after they reject her petition for a new stop sign, has heartfelt conversations with both of her sons, and argues about a life-changing decision with her best friend Judy Hale (Linda Cardellini) — all of which lead her to the bombshell choice she makes as the episode draws to a close.

Will Applegate’s witty and heartrending performance win her a second Emmy? See the pros and cons of Applegate’s submission below.

Applegate submitted an excellent showcase to Emmy voters that demonstrates her impressive range. After a funny start to the episode, with Jen chastising herself for sleeping with Ben, Applegate digs into the complexities of her character that especially come through in two standout scenes. At the city council meeting, Applegate glibly addresses a panel of creaky white men, but the scene turns on a dime when she bravely confronts a man who sexually assaulted her in the first season. And then when Judy tells Jen that she’s going to turn herself into the police, Jen makes a confession and tears herself down, thinking she’s worthless in a heart-wrenching moment. It’s a moving installment, and Applegate deftly navigates Jen’s myriad emotions.

Voters in the category will get a second look at Applegate’s performance thanks to co-star Cardellini’s submission, “If Only You Knew.” If voters watch both episodes, they’ll get an even better idea of the scope of Applegate’s performance. In Cardellini’s episode, Applegate gets more comedic material as she works with her older son Charlie (Sam McCarthy) on the aforementioned petition for a stop sign at a dangerous intersection, awkwardly flirts with Ben, gives Judy amusing relationship advice, and offers to plan a vigil for Ben’s missing brother, Steve. She gets to play some emotional beats, too, as she meets Steve and Ben’s grieving mother, cries over a slideshow of Steve, and sparks a deep connection with Ben.

Some voters might think Applegate is overdue for her second Emmy victory. Though she won her first and only Emmy on her very first nomination for “Friends” back in 2003, she hasn’t picked up another trophy since then despite additional bids for “Friends” (2004), “Samantha Who?” (2008-2009), and now “Dead to Me” (2019-2020). With Emmy nominations for “Dead to Me” on an upswing this year, the acting branch might want to acknowledge the series by awarding its star with a second statuette after a 17-year wait.

While an impressive acting showcase, Applegate’s submission is emotionally dark for a category that often privileges broader humor. Although recent winners Phoebe Waller-Bridge (“Fleabag”), Rachel Brosnahan (“The Marvelous Mrs. Maisel”) and Julia Louis-Dreyfus (“Veep”) delivered nuanced and at times dramatic performances, their winning submissions were always hilarious. So Applegate’s episode might seem too serious for voters to award it with a top comedy prize.

Unlike last year, Applegate faces competition from her co-star Cardellini, and fans of “Dead to Me” in the acting branch might not have a clear preference between the two actresses when they cast their ballots, splitting their votes and opening the door for another winner. Applegate’s submission also showcases Cardellini’s terrific performance, as the episode features not only Judy’s reunion with her manipulative mother (Katey Sagal) in prison, but also her memorable, moving breakdown in the car after Jen cruelly criticizes Judy’s love for her.

Although acting branch support for “Dead to Me” increased this year with the nomination for Cardellini that it missed last time around, it nevertheless underperformed elsewhere. It missed an anticipated Supporting Actor nomination for Marsden, which could indicate that the series doesn’t have quite enough support with actors yet to take home the Comedy Actress trophy.