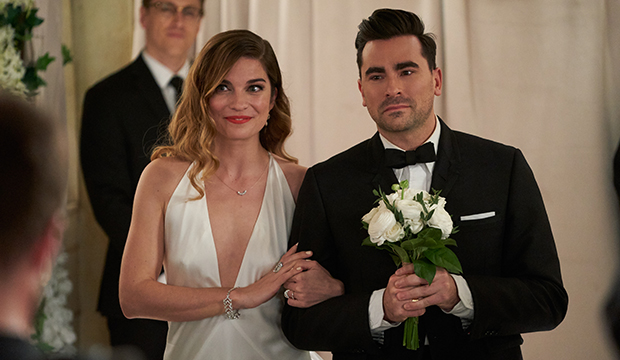 Dan Levy is a leading creative force behind Pop TV’s comedic smash “Schitt’s Creek.” The Emmys finally caught on to this word-of-mouth hit, and Levy racked up an impressive four nominations for producing, writing, directing and acting in the final season. He is nominated for Best Comedy Supporting Actor for his high-strung portrayal of David Rose and has submitted the series finale, “Happy Ending.”

The episode takes place on the day of David and Patrick’s (Noah Reid) wedding. David is awoken by his family, who informs him that a brutal rainstorm has washed away his plans for an outdoor ceremony. Patrick books a massage for his stressed fiancé while he works to secure a new venue. When Patrick returns to inform David that the wedding will take place at the town hall, they are shocked by his calm composure. David reveals that the masseuse gave him a happy ending, which he mistakenly believed was Patrick’s intentions for the spa session.

Wedding day mishaps continue when David points out that Alexis (Annie Murphy), who is to walk the groom down the aisle, is wearing a white wedding dress. After a heart to heart, the siblings enter the town hall while the Jazzagals croon “The Best.” A teary Moira (Catherine O’Hara) presides over the ceremony. Patrick keeps the music flowing by singing through Mariah Carey’s “Always Be My Baby” as his vows. David’s vows flow with emotion before concluding with, “Patrick, you are my happy ending.”

SEE All in the family: Eugene and Dan Levy (‘Schitt’s’ Creek’) can make history with Emmy acting wins

Levy truly feels like a lead player in this episode, as opposed to supporting. Even though this series finale ties up the stories of each main character, the focus on David and Patrick’s wedding ensures that Levy is at the center of every story beat. We’ve seen repeated examples of supporting races go to actors with increased screen time. Levy fits that bill.

The episode allows Levy to showcase an impressive range. He has classic David freak-out moments, with the prime example being his expletive-filled frenzy as he wakes up to the rainstorm. But Levy also taps into a tender side of David that is rarely revealed on “Schitt’s Creek.” It’s near impossible not to cry during David’s vows as the character opens up in front of the entire town. The performance is a captivating mix of comedy and heart, which makes Levy easy to root for.

There could be voters who are solely interested in laughs because this is a comedy category. In that case, the sentimentality of the marriage could be a negative in their eyes. Ditto the tearful goodbye at the episode’s conclusion, during which the Rose clan goes their separate ways.

Levy is going up against Emmy favorites like Tony Shalhoub and Sterling K. Brown, and veterans like Alan Arkin, who is seeking his first Emmy win. Levy’s multiple nominations across various disciplines could actually hurt him here. A voter may check off another actor they appreciate if they have a hunch Levy will be rewarded in a different category.