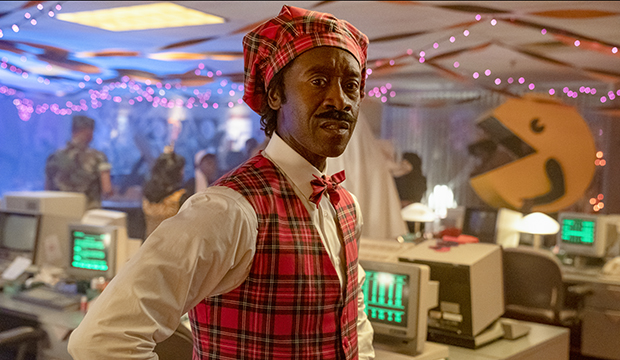 For the second year in a row, Don Cheadle has scored the sole Emmy nomination for “Black Monday,” in Best Comedy Actor. Hoping to score his first career victory, he has submitted the Halloween episode, “Who Are You Supposed to Be?”, for consideration, which Cheadle himself has dubbed as “crazy.”

In the episode, Mo (Cheadle) is dressed as Prince Akeem from the 1988 Eddie Murphy film “Coming to America.” The episode opens with Mo riffing and reminiscing with Dawn (Regina Hall) while spiking the punch. We then see him juggle relationships as he tries to make a deal with the FBI, get Blair (Andrew Rannells) caught for insider trading, convince Dawn to keep her hands clean, and try to figure out who Keith (Paul Scheer) is working for.

When Marcus (Dule Hill) arrives in a regal Prince Akeem costume, the two men fight over who can dance with Dawn. This results in an outrageous “My Prerogative” dance-off between the two. Mo and Dawn slow dance, leading to an intimate scene between the couple, during which they discuss how Mo is a changed man. This is broken up by Dawn breaking the news that she decided to take part in insider trading.

Mo then scrambles to protect Dawn from the FBI and argues with her. The end of the episode has an undercover FBI agent propose a double date with her and Mo, and Dawn and Marcus.

Cheadle’s got plenty to do, and his dance battle is a great comedic moment that will stand out in the minds of the voters. Also, he’s in a wacky costume the whole time.

Besides being outright funny, the episode also allows him to show off his range. At times, he’s soft and vulnerable; at other points, angry and sneaky.

This is Cheadle’s second nomination for this role, but he has four other bids in this category for his previous Showtime series “House of Lies.” His career nomination total is 10, but he has yet to win. If voters are aware of his record, that could help.

It’s difficult to win an Emmy when you’re the only nominee representing your show. The last comedy actor winner who accomplished this was Richard Mulligan from “Empty Nest” in 1989. The other shows in this category all have multiple nominations.

Cheadle’s competition has more momentum than he does. The field includes two comedy legends competing for their shows’ final seasons, Ted Danson (“The Good Place”) and Eugene Levy (“Schitt’s Creek”), with the latter being the front-runner. Ramy Youssef (“Ramy”) is the Golden Globe champ. Cheadle is a movie star, but Michael Douglas (“The Kominsky Method”) is an even bigger one, and Anthony Anderson (“Black-ish”) is also on his sixth bid in the category without a win.

For voters unfamiliar with the show, the backstory with the FBI, politics and trading might be hard to understand or worse, bore them.