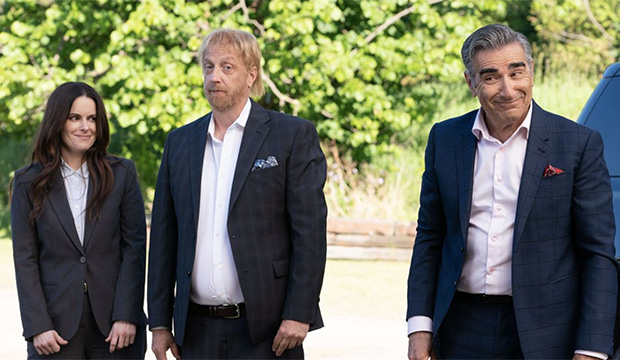 Though he has worked in entertainment for decades and won two Emmys for writing “SCTV,” Eugene Levy was never Emmy nominated for his acting until last year. But now he’s making up for lost time. The performer returns to the Best Comedy Lead Actor race this year for playing Johnny Rose on Pop TV’s “Schitt’s Creek.” Will the final season of this beloved comedy land Levy an acting win? Levy has submitted the Season 6 episode “The Pitch” for Emmy consideration.

In this episode, Johnny flies to New York City with Stevie (Emily Hampshire) and Roland (Chris Elliott) to pitch their idea for a boutique chain of motels to investors. The meeting goes south quickly. Johnny’s former associate is a no-show, so the meeting happens in a boardroom full of strangers. Two of the board members make jabs at Johnny’s fall from grace. Roland spills water everywhere.

After a brief break and pep talk, the trio returns to the meeting and Johnny commands the boardroom with a heartfelt description of his vision for the Rosebud Motel Group. The partners ultimately pass on the project, but junior partner Ruth (Elena Juatco) is won over by the small-town charm and chooses to back the project. Johnny returns home to an excited family with the good news.

Let’s look at the pros and cons of this episode submission.

Many great comedic performances rely on quick back-and-forth dialogue, but Levy gets to command the screen with a heartfelt monologue that serves as the core of this episode. It is an impressive full-circle moment for Johnny. He’s back in his old business mode, but Levy also gets to showcase how the character has grown in humility and heart over the course of the series.

“Schitt’s Creek” usually splits focus fairly evenly between the four Rose family members, but “The Pitch” is truly Johnny’s show. By removing Johnny from Schitt’s Creek for the majority of the episode, Levy’s straight-man portrayal of the Rose patriarch is in no danger of being overshadowed by the more eccentric characters played by Catherine O’Hara, Dany Levy and Annie Murphy.

Levy’s subdued characterizations (at least when compared to the likes of Moira Rose) are perfect for Johnny. Unfortunately, this means Levy is not set up with a ton of punchlines in this episode. Voters will need to be won over by heart more than humor if they’re voting for Levy.

Even though separating Johnny from his family provides one of his best moments of the entire series, some fans might be bummed about not getting many scenes with the entire Rose family together. “Schitt’s Creek” is beloved for many reasons, one of them being that the four central actors do an outstanding job of bouncing off one another. It might be a risky move to submit an episode that upsets this winning formula.