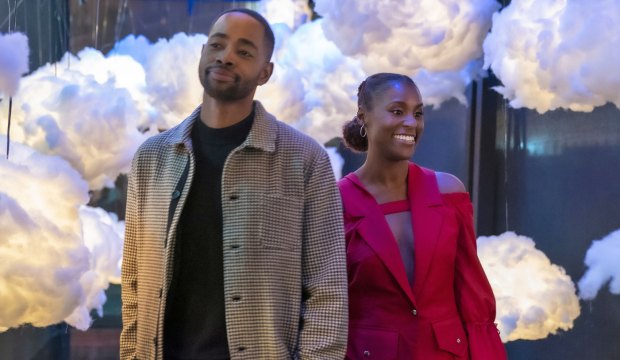 The Emmys were lowkey digging season 4 of “Insecure” as the show received its most Emmy nominations in a single year: eight including its first nom for Best Comedy Series. Its star Issa Rae not only earned her second Best Comedy Actress nomination, but also two additional noms as an executive producer for “Insecure” and “A Black Lady Sketch Show,” which is up for Best Variety Sketch Series. For her acting submission to Emmy judges this year, Rae has chosen the episode “Lowkey Happy,” which showcases Rae’s comedic timing as well as a quieter and more vulnerable side of her character.

In this episode, Issa (Rae) and Lawrence (Jay Ellis) reconnect over dinner and open up about their past relationship, their growth since they broke up, and a possible reconciliation. Issa’s awkwardness is on full display in the first moments of the episode as we see her slip and fall on her way to greet Lawrence at the bar. After brushing off the initial embarrassment she and Lawrence begin to bond again.

After ditching the bar due to the noise Issa and Lawrence discuss past mistakes, lessons learned and ultimately happiness. The episode ends with Issa and Lawerence exploring the possibility of rekindling their relationship to the delight of many fans of the show who have been patiently waiting for these two characters to get back together.

SEEPrentice Penny (‘Insecure’ showrunner): ‘This show is about our beauty, not our burden’ [EXCLUSIVE VIDEO INTERVIEW]

Although the episode showcases Rae’s vulnerable side, there are comedic moments sprinkled throughout, like Rae falling in the bar, randomly running into her “TSA Bae” Marvin (Reggie Conquest) who she had a fling with, and being annoyed with a nosy Uber driver.

This episode is relatable as it explores the evolution and maturity of people who have been in a relationship. Rae and Ellis make those nuances authentic.

With its sudden breakthrough at the Emmys, this might be the year in which voters finally reward the show and most importantly its MVP with a lead-actress win for Rae.

Though Rae is on the rise as one of Hollywood’s major comedic talents, this episode only has a few outright funny moments, so it may be too subtle for voters compared to other laugh-out-loud performances in her category.

This episode may resonate more with longtime fans than voters who may be newer to the show. Fans have a vested interest in Issa and Lawrence’s relationship over these last four seasons that the average voter may not feel as strongly out of context.