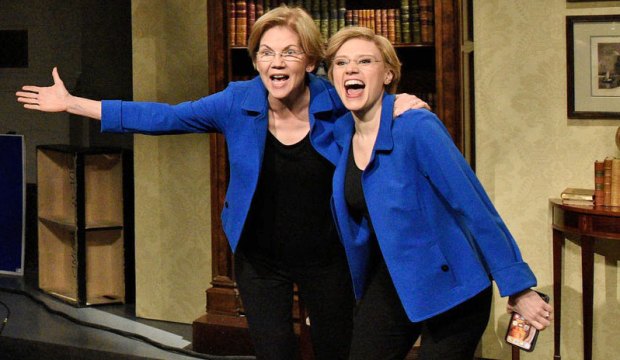 Kate McKinnon extended her streak of Best Comedy Supporting Actress Emmy nominations to seven this year for her work as a main cast member on “Saturday Night Live.” She has been nominated every year since 2014 and won in 2016 and 2017. This year she submitted the Daniel Craig-hosted episode, which was the final live studio show for the NBC sketch comedy before production had to shut down due to COVID-19.

In the episode, McKinnon is the main star of the cold open as Fox News host Laura Ingraham. She gets to bounce off of numerous people in this sketch, including Cecily Strong as Jeanine Pirro, Darrell Hammond as Chris Matthews and Sen. Elizabeth Warren as herself. While Warren is speaking, McKinnon makes a quick change into her own impersonation of Warren and appears alongside her real-life counterpart at the end of the sketch. McKinnon later appears as a visor-wearing gambler with James Bond, a soap opera star trying to work in the age of COVID and a party guest whose husband is a little too comfortable with another woman.

Can McKinnon win her third Emmy this year? Let’s weigh the pros and cons.

McKinnon proves that when they like you, they really like you. Seven Emmy nominations in a row is a very impressive streak, especially when you consider how the Emmys tend to move on from nominating a performer after a while, but the actress keeps on trucking. She has managed a successful career in both film and television and is arguably the biggest star of the cast at this point. With this being an election year and McKinnon playing so many public figures, voters may be more swayed to pick the actor they’ve seen the most in the news from her viral sketches.

Her episode submission also has her showing her range in various roles, literally anchoring the cold open as Ingraham in her trademark lackadaisical tone, making that impressive change into Sen. Warren, indulging in slapstick comedy with host Craig in the soap opera sketch and being more of a reactive character in the party skit. She fits into each role seamlessly and gets the laugh every time, and voters usually like to laugh out loud in the comedy races.

Since McKinnon hasn’t won since 2017, Emmy voters may have moved on from giving her repeated trophies. Alex Borstein (“The Marvelous Mrs. Maisel”) has taken over with a pair of wins in Comedy Supporting Actress for the last two years, and while it’s common for actors to win multiple times in a row, it is difficult to win again for the same project after a couple of losses.

This category saw an infusion of fresh nominees this year, including D’Arcy Carden (“The Good Place”), Annie Murphy (“Schitt’s Creek”), Yvonne Orji (“Insecure”), and McKinnon’s own co-star, Cecily Strong, so the TV academy may be looking to reward new actors. It is possible that McKinnon and Strong could even split support among diehard “SNL” fans within the academy.