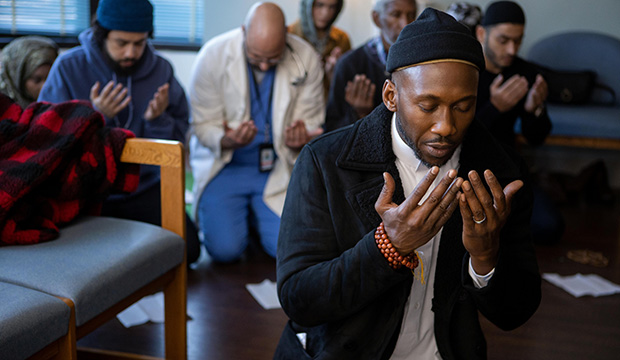 He may have already won two Oscars, but Mahershala Ali isn’t done being a force at awards shows. He finds himself in this year’s Emmy race for Best Comedy Supporting Actor for playing Sheikh Ali Malik on “Ramy,” the Hulu series created by Ramy Youssef. For his episode submission, Ali has chosen “Little Omar,” the third episode of the show’s second season.

After Dennis, a recent convert whom Ramy brought into the masjid, severely beats an anti-Islam protester, Sheikh Ali leads members of the congregation in prayer for the victim at the hospital. He brings Ramy to see the victim’s brother since the victim is basically braindead and Sheikh Ali prays by his bedside. The pair then visits Dennis in jail, and Dennis asks them to find his dog, Boomer, who is in his abandoned car, which Sheikh Ali promises to do. The sheikh asks Ramy to pray for Boomer, which confuses Ramy as his parents taught him dogs were haram (forbidden) in Islam. Sheikh Ali explains that a lot of Muslims don’t understand that nothing in the world is haram, but rather how one chooses to engage with something that can be haram. He likens Islam to an orange with the rules and rituals like the bitter rind and the spiritual experience like the tasty fruit inside and that they must exist together.

The pair searches through various tent cities in Newark for Boomer with no luck, but Sheikh Ali is determined to continue. When the time for evening prayers come, Ramy tries to get out of it, but Sheikh Ali forces Ramy to see things in a different light by pointing out that he needs to see the blessings in life’s curses and that the search for Boomer may not be the burden he thinks it is. As the two begin to pray, they hear the faint sound of a dog barking, which leads them to finding Boomer in Dennis’ car. After freeing her and cleaning her up, the sheikh takes Ramy home. He admits that he may have made a mistake in agreeing to take on Ramy as a student since he lied to him about Dennis’ past and might not be ready for the commitment. He tells Ramy to take in Boomer and study with the dog as his teacher because she embodies purity, truth, compassion and true love.

This is Ali’s third career acting Emmy nomination. He was nominated for Best Drama Guest Actor in 2016 for “House of Cards” and for Best Movie/Limited Lead Actor last year for “True Detective” (he has another nomination this year as an executive producer on Best Children’s Program nominee “We Are the Dream”). Could this episode lead to Ali’s first Emmy? Let’s take a look at the pros and cons of the episode.

Ali brings the perfect kind of gravitas you would want for this kind of character, who serves as the head of a Sufi Islam center and is a spiritual mentor for Ramy. He is stern, disciplined, principled, and filled with wisdom and an ability to give comfort and reassurance to others; Ali plays it all in a seamless manner.

Ali’s career could not be at a higher point. He scored his first Emmy nom just four years ago and since then he’s been an awards magnet, most notably with his two Oscar wins for Best Supporting Actor for “Moonlight” (2016) and “Green Book” in (2018).  That pedigree on its own is reason enough to make him a very serious contender for the win.

It’s a great performance, but it’s not really funny and that has proven to be an obstacle for several nominees in the comedy categories. Jeffrey Tambor (“Transparent”) and Bill Hader (“Barry”) have managed to win with more nuanced material, but there were levels of comedy to the situations their characters were in that don’t apply to Ali’s role, and that could be a problem.

Ali serves as a more reactionary character and that kind of role can be a tougher sell in the comedic acting categories. Winners are usually characters that are part of provoking a situation rather than those that serve as counters to the people at the center of a conflict.