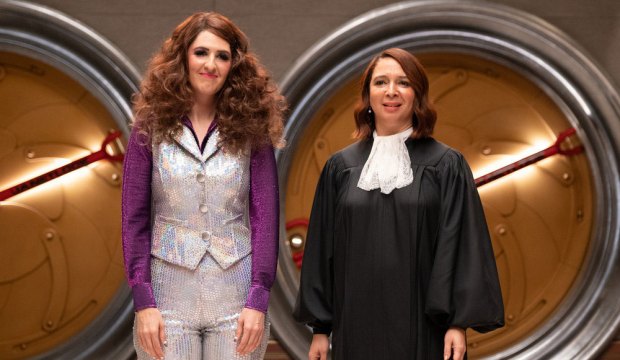 Maya Rudolph made Emmy history in 2020 as the first guest performer nominated for two different performances in the same category: Best Comedy Guest Actress. One is for her cameo as Kamala Harris on “Saturday Night Live” while the other is her third nomination in a row for her performance as Judge Gen in “The Good Place.” She has an additional bid in the character voice-over category for “Big Mouth,” proving that Emmy voters love her comedic work. She has yet to win an Emmy, but “The Good Place” episode she submitted, “You’ve Changed, Man,” might just do the trick.

“You’ve Changed, Man” finds Judge Gen hunting for the button to restart Earth, which was hidden by Janet (D’Arcy Carden). She searches the voids of the various Janets (Bad Janet, Disco Janet, etc.) while our heroes try to prevent her from doing so. Along the way, we get to see more of the Judge’s unique and colorful personality: she’s an obsessive binge-watcher who has a thing for TV dads. Our heroes pull off the ultimate coup when they manifest Timothy Olyphant from “Justified,” delighting the Judge beyond measure. She eventually abandons her plan to restart the Earth when all parties come to an agreement.

Rudolph infuses Judge Gen with a goofy energy, stretching out the word “bye” to comedic effect, confidently acknowledging her daddy issues and howling when speaking about Olyphant, or as she calls him, “50 gallons of man in a 10-gallon hat.” So will the third time be the charm for Rudolph at the upcoming Emmys? Let’s weigh the pros and cons.

It is clear that Emmy voters admire Rudolph’s comedic stylings based on her three nominations. Of the three, her performance in “The Good Place” may be the most pressing to reward considering it’s her third nomination and the final season of the show. She will likely continue her voice role on “Big Mouth” in seasons to come, and depending on the results of the 2020 presidential election, she has a solid chance of recurring on “SNL” as Vice President Harris in the future. Voters have been fans of her work as Judge Gen since she first appeared in season two, before “The Good Place” even started getting into the Best Comedy Series category, so it’s clear that this character has enduring support.

“You’ve Changed, Man” gives Rudolph all kinds of fun material to work with, and she makes a meal out of every line, which makes this one of the strongest episodes in her category. There was also an increase in love for “The Good Place” in its final season, with two of its stars, D’Arcy Carden and William Jackson Harper, getting in for the first time. Many Emmy Experts that the comedy categories will come down to “The Marvelous Mrs. Maisel” vs. “Schitt’s Creek,” but Rudolph presents a strong opportunity for voters to spread the wealth to another show they love.

The concept of vote-splitting is often discussed when it comes to two or more co-stars nominated in the same category, but rarely has it come into play for one actor getting in for two different projects. It’s unclear which of these performances voters will prefer. Her role in “The Good Place” has gotten in for the last three years, but her performance as Harris received a significant boost after the VP announcement on Aug. 11. This could overshadow her consistent but not as politically buzzy work on “The Good Place.”

Additionally, “The Good Place” has yet to actually win an Emmy, so it’s possible that voters like the show and her performance enough to nominate but not quite enough to actually award. Best Comedy Guest Actress has contenders from other shows the TV academy seems to love more based on their number of nominations: Rudolph and Phoebe Waller-Bridge for “SNL” and Wanda Sykes for “The Marvelous Mrs. Maisel.”