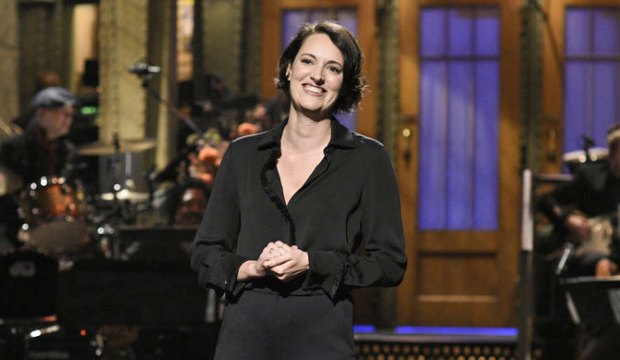 A year after winning three Emmys for writing, producing and starring in “Fleabag,” Phoebe Waller-Bridge is feeling the afterglow with two more nominations in 2020. One is for producing Best Drama Series contender “Killing Eve,” and the other is in Best Comedy Guest Actress for her first hosting stint on “Saturday Night Live.” Her “SNL” gig came just a week after her epic Emmy sweep last year, a serendipitous moment that allowed her to tastefully shout out her recent award victories in her monologue.

Waller-Bridge’s “SNL” opening also covers the curious subject matter of her shows, from the horniness of “Fleabag” to the psychopath-centric “Killing Eve.” Her subsequent sketches in her episode include a wide range of characters. In “What’s Wrong with This Picture,” she plays a blissfully unaware game show contestant. A spoof of “Love Island” features her as a reality show star with huge fake lips. She also plays a news anchor who finds herself in a bit of a race war, an Air Force pilot’s wife whose letters are a little too curt, a duchess who once dated a Blacksploitation star and a rowdy Southern woman at a bar. Her roles run the gamut from straight man to goofy and showcase her talent for accents. So will PWB pull off another Emmy win this year? Let’s weigh the pros and cons.

Quite frankly, Waller-Bridge is in the club now, and the Emmys tend to shower certain actors they really love with awards year after year. While the Comedy Guest Actress category is filled with familiar faces this year, none of her competition has even won an Emmy in the 21st century, giving Waller-Bridge a distinct advantage. It also helps that her episode allows voters to see a wide range of her comedic abilities, which may impress some that have only seen her in “Fleabag.”

Emmy voters have also been very kind to “SNL” hosts lately, especially women who are known for their comedic talent. Tina Fey, Amy Poehler, Melissa McCarthy and Tiffany Haddish all won trophies in three of the last four years in this category. That helps Waller-Bridge, with Maya Rudolph‘s cameo as Sen. Kamala Harris as the only other “SNL” nominee in the bunch.

She received good reviews for the episode, but it aired all the way back in October, so voters may not remember her as much as others in her category. While it does allow her to show off her range more than most of the other nominees in Comedy Guest Actress this year, few of the sketches have seemed to endure as viral moments almost a year later.

It is also possible that Emmy voters will feel they’ve taken care of Waller-Bridge after last year’s lovefest. This is a category that includes multiple talented women who have not yet won an Emmy, including Rudolph and Angela Bassett (“A Black Lady Sketch Show”), and voters might wish to finally give them their time in the sun.