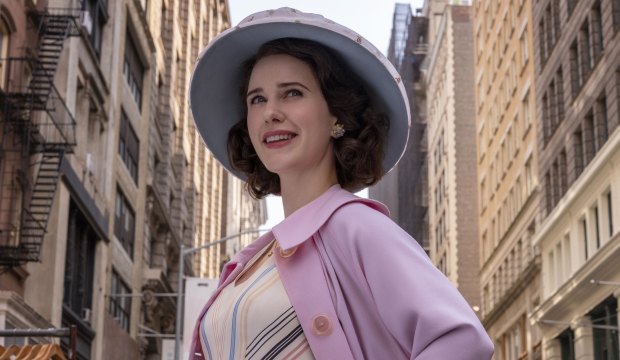 For the third year in a row, Rachel Brosnahan is among the Primetime Emmy nominees for Best Comedy Actress for her performance as the title character on Amazon’s “The Marvelous Mrs. Maisel.” She already won for the first season in 2018, while last season she took a backseat to Phoebe Waller-Bridge during the awards sweep for her series “Fleabag.” Earlier this year Brosnahan also won a SAG Award (along with the rest of the cast) as TV’s best comedy ensemble; that was her third SAG win overall for the show. Her episode submission for the Emmys this year is the season three finale, “A Jewish Girl Walks Into the Apollo …”

In that episode, Midge and her ex-husband, Joel (Michael Zegen), have disagreements over whether or not they can afford to send their children to an upper-class private school in Manhattan. Joel’s father, Moishe (Kevin Pollak), agrees to sell Midge’s former apartment back to her by using her tour contract with Shy Baldwin (Leroy McClain) as collateral.

Midge is stunned to be billed ahead of Black comedy legend Moms Mabley (Wanda Sykes) for Shy’s big showcase at Harlem’s legendary Apollo Theater. Shy’s manager, Reggie (Sterling K. Brown), suggests an anxious Midge just talk about Shy and the tour. Her improvised jokes about Shy’s effeminate behavior wins over the tough Apollo audience, but Reggie kicks her off the tour for nearly outing Shy.

Can Rachel Brosnahan make a comeback at the Emmys this year? Let’s dive into the pros and cons.

Since Rachel Brosnahan has already won for the first season, that could be a strike against her if voters don’t feel there’s an urgency to honor her again now. She’s up against Catherine O’Hara for her role on the final season of “Schitt’s Creek.” This is O’Hara’s last chance to win for this show and it would be the first acting Emmy of her career, which could make her the sentimental favorite. After all, the television academy has given several farewell hugs in recent years (like Waller-Bridge and Peter Dinklage for “Game of Thrones” last year, and Matthew Rhys for “The Americans” in 2018, to name a few).