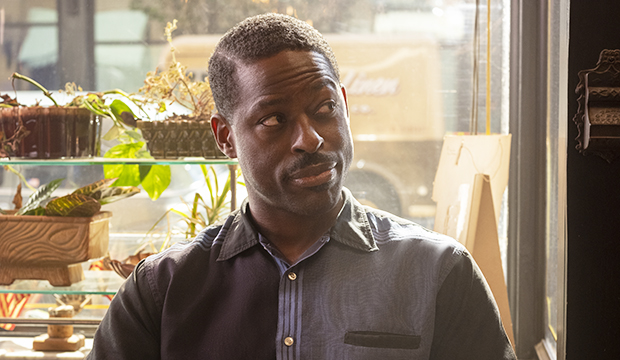 Sterling K. Brown did what very few actors have done, turning a guest role on “The Marvelous Mrs. Maisel” into a supporting actor nomination at the Emmys. This is because he was in too many episodes to qualify in guest, but it speaks to the amount of love for Brown in the industry, considering he also landed another bid for his actual series regular role on “This Is Us” on the drama side. Brown had a recurring role on the Amazon comedy series as Reggie, the manager for popular singer Shy Baldwin (Leroy McClain) for whom Midge (Rachel Brosnahan) is opening.

Brown is submitting “Panty Pose” to Emmy voters, the third episode of the third season. In this episode, Reggie, Shy, Midge, Susie (Alex Borstein) and the rest of the crew travel to Las Vegas. On the plane, we see Reggie calming Susie’s nerves of being up in the air. Once landed, Reggie speaks at a press conference alongside Shy, sarcastically needling the press for its dumb questions and being very protective of his client. When Susie interrupts the conference accidentally, he spars with her and becomes frustrated when Susie and Midge express their outrage at the photo they’ve chosen to promote Midge. Later, Shy invites Reggie up to sing and Brown gets to show off his crooning skills. At the end of the episode, Reggie asks Susie if her girl is going to get good.

Will “Panty Pose” secure another Emmy win for Brown? Let’s weigh the pros and cons.

SEE ‘This Is Us’ and ‘The Marvelous Mrs. Maisel’s’ Sterling K. Brown reveals which TV show he wants to guest on next

Voters already loved Brown and “The Marvelous Mrs. Maisel” separately, so putting them together is a match made in Emmy heaven. Brown has so much respect within the TV academy, collecting a whopping seven nominations and two wins since 2016. “Maisel” gives voters the opportunity to see Brown in a whole new light as a suave, fast-talking manager, and it’s easy to imagine them being impressed by his vocal chops.

“The Marvelous Mrs. Maisel” earned 20 Emmy nominations, seven of which were for acting. The acting branch still loves the show and that could easily extend to its winner selection. In its first two seasons, the show won multiple Emmys for acting, including sweeping the supporting and guest categories last year. Brown is so likable on the show, and in general, so he could very well be part of another big “Maisel” sweep.

As fun as Brown’s performance is, it really is more of a guest performance. Most of the other Best Comedy Supporting Actor nominees are series regulars with fully fleshed out arcs, and while Brown does get solid material throughout the season, it simply doesn’t compare to that of his competition.

His “Maisel” co-star and defending champ Tony Shalhoub is nominated in this category. There are two scenarios that would be bad for Brown: Shalhoub could simply repeat or they could split the vote so significantly that neither wins.