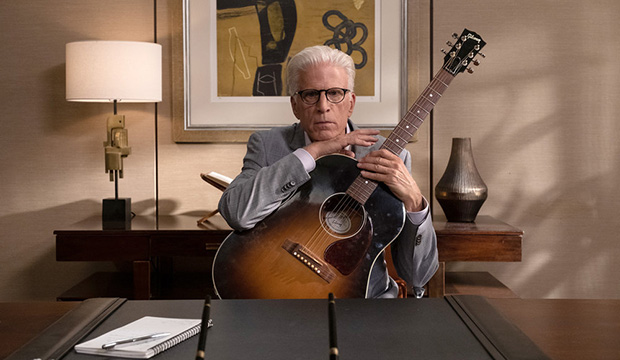 Ted Danson is nominated at the Emmys once again for his performance as Michael in “The Good Place.” It is his 18th overall bid and record 14th one in Best Comedy Actor from the TV academy, which gave him two Emmys for another NBC comedy, “Cheers,” in the early ’90s. This is his third comedy actor nomination in a row for “The Good Place,” which concluded its fourth and final season in January. Danson is submitting the series finale, “Whenever You’re Ready,” for consideration.

The series finale opens with Michael trying in vain to learn how to play the guitar. He has an air of melancholy throughout the episode as each of his friends makes the decision at various points in time to leave the Good Place. Eventually, Michael becomes jealous and tries to exit through the existence-ending door to no avail; only former humans can do so, while supernatural beings like Michael cannot. To make Michael happy, Eleanor (Kristen Bell) makes a plan with the Judge (Maya Rudolph) to have Michael fulfill his wildest dream: to be a human. They transport Michael to Earth, and he is visibly content with the knowledge that he doesn’t know what is to come in the afterlife, just like a human being. We see a cameo from Danson’s real-life wife, Mary Steenburgen, who teaches him guitar, and he has a series of good and bad days while clearly living life to the fullest. The episode, and by extension, the series, ends with Michael meaningfully telling a neighbor to “take it sleazy.”

Will the third time be the charm for Danson? Let’s weigh the pros and cons.

SEE Don’t count out Ted Danson just yet at the Emmys, warns one rogue Expert

Danson is a TV veteran who can now add another iconic character to his resume. “The Good Place” gave the actor the ability to be weird, zany and heartfelt all at the same time. This final episode is a testament to his genius as an actor, especially in his attempts to walk through the door; he makes the moment simultaneously hilarious and heartbreaking. He also gets to be the focus of the show’s final minutes as ordinary interactions become extraordinary for a guy who finally gets to be human.

This is also the perfect opportunity for voters to reward “The Good Place” if they are not voting for it in Best Comedy Series. Danson was one of the show’s first nominations in 2018 even before it broke through in comedy series, so they’ve clearly had an extended love for this character. Voters may be most impressed by Danson compared to the other two presumed front-runners, Eugene Levy (“Schitt’s Creek”) and Ramy Youssef (“Ramy”), who are decidedly more subtle in their performances.

“The Good Place” has never won an Emmy and despite growing in nominations every year, voters might not feel that they owe it an award in any category. For as understated as Levy and Youssef are, one could easily imagine the former getting swept in with a major embrace of “Schitt’s Creek” or the latter riding the wave of his Golden Globe win in January. Neither actor has won an Emmy for acting while Danson already has two.

While “Whenever You’re Ready” gives Danson plenty of strong scenes that display his full range of comedic and dramatic ability, the focus is split with concluding the stories of five other characters, so voters might not be as wowed as they would be if he dominated the episode.