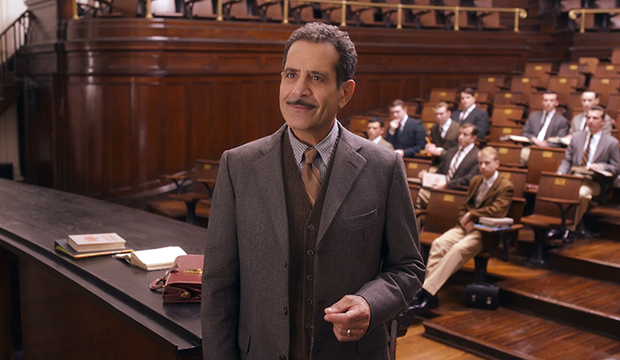 Tony Shalhoub is nominated once again for Best Comedy Supporting Actor after winning this category last year for playing Abe on Amazon’s “The Marvelous Mrs. Maisel.” With his three wins for “Monk,” that makes Shalhoub a four-time Emmy winner. In an effort to clinch trophy No. 5, he has submitted the episode “Marvelous Radio” for consideration.

It’s another tense breakfast at the Maisel house, where Abe spars with Moishe (Kevin Pollak) and refuses his money. Abe claims he has budgeted his finances for the rest of his life, but notes “I need to be dead by 1965.” Abe returns to Columbia University and enters his old classroom, where he praises (most of) his former students. “They all deserve their place here,” Abe declares. “All but six.” The former professor admits to being miserly in his teaching and realizes that the classroom is no longer where he belongs.

Asher (Jason Alexander) calls to discuss the article Abe wrote about his plays. Asher doesn’t want the piece published, but Abe moves forward with it anyway. The piece is published in the “New York Times,” which Abe begins to hawk at his grandson’s bris. His giddiness is tempered when he learns Midge (Rachel Brosnahan) is doing a commercial for an extremist politician, which he discourages.

The episode is peppered with hysterical classic comedy bits, which show why Shalhoub is so well respected as a comedic actor. The gleeful jabs he takes at his former students (all well having a self-fulfilling epiphany) play out beautifully. His back-and-forth argument with Alexander feels like a great new twist on the “who’s on first” skit. “Maisel” is a comedy that often delves into more serious matters, but Shalhoub consistently keeps the audience roaring with his pitch-perfect delivery.

Speaking of serious business, this episode gives Abe the chance to break from the funny business when he encourages Midge to use her voice for good. It’s a beautiful moment that reminds the audience that although the show feels like a glorious MGM musical, these characters face major hurdles in 1960. It’s also refreshing to see Abe have a genuine fatherly moment after being away from Midge for a time.

After the bris sequence, Abe completely disappears from the episode as the narrative turns its focus to the opening night of “Miss Julie.” Shalhoub is up against actors like Dan Levy (“Schitt’s Creek”) and Alan Arkin (“The Kominksy Method”) who dominate the screen time of their episode submissions. So ducking out for the final act of his submission could hurt him.

When Shalhoub won this category last year, he was the only “Maisel” actor in the lineup. This time, Sterling K. Brown is also nominated for his performance on the Amazon series. A respected Emmy winner like Brown could siphon off votes from Shalhoub, providing a pathway to victory for another actor.