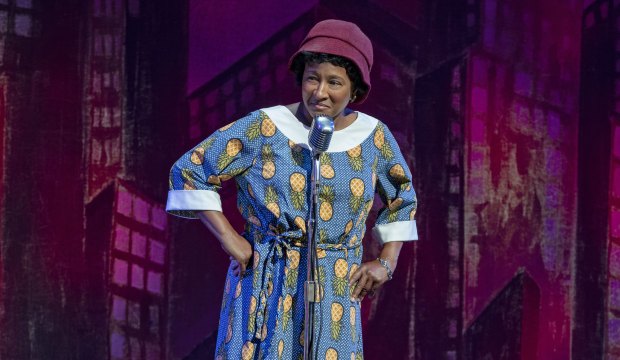 Wanda Sykes returns to the Best Comedy Guest Actress Emmy race for her turn as famed real life comic Moms Mabley in “The Marvelous Mrs. Maisel.” This is actually one of three nominations this year for Sykes, who also competes in Best Character Voice-Over Performance for “Crank Yankers” and in Best Variety Special (Pre-Recorded) for producing “Tiffany Haddish: Black Mitzvah.” Will playing a real-life figure finally land Sykes an Emmy for acting? For her Guest Actress bid, Sykes has submitted the episode “A Jewish Girl Walks into the Apollo.”

In this season three finale, Midge (Rachel Brosnahan)  gets the chance to open for Shy Baldwin (Leroy McClain) at the legendary Apollo theater in Harlem. Before taking the stage herself, Midge watches Moms Mabley kill a stand-up set which has the audience roaring. Backstage, Midge gets a chilly reception from Moms and her manager, who points out that Midge has stolen the prime spot of the night from Mabley. The manager is furious, but Mabley calmly welcomes Midge to the Apollo knowing that the local audience will eat her alive.

Sykes is playing a legendary and beloved comedian. Awards voters are suckers for actor transformations, and Sykes uses a different voice and physicality to embody Mabley. Anyone familiar with Mabley’s persona will be wowed by the way Sykes channels her during the hysterical stand-up routine. This trick worked for “Maisel’s” Luke Kirby, who won Best Comedy Guest Actor in 2019 and is nominated again in 2020 for playing Lenny Bruce.

As our nation confronts white privilege and racial injustice, this episode has greater relevance. Midge is encroaching on Mabley’s territory, playing the Apollo and taking the prime spot from a celebrated Black comic who has worked longer and harder than she has. Mabley knows that Midge faces an uphill battle with the audience, so Sykes’s sweetly wicked kiss-off, “It was nice meeting you Mrs. Maisel, welcome to the Apollo,” hangs over the rest of the episode, foretelling Midge’s ultimate downfall.

There is limited screen time for Sykes’s character. Her stand-up routine starts at the 54-minute mark. That means that the amount of time spent off-screen is longer than the running time of some of her competitors’ whole episodes. Once Mabley is off stage, Sykes has one scene with Brosnahan before departing for the rest of the episode. That doesn’t give Sykes much of a character or story arc to play.

Sykes won a writing Emmy for “The Chris Rock Show” in 1999, but has never prevailed at the ceremony as an actress. She was competitive to win this same category for “Black-ish” in 2017, but was bested by Melissa McCarthy (“SNL”). Perhaps surprisingly, the majority of her 14 Emmy nominations are for her talents as a scribe, despite numerous performances on Emmy-winning comedies like “Curb Your Enthusiasm” and “The New Adventures of Old Christine.” Is there an Emmy curse preventing her from claiming an acting trophy?