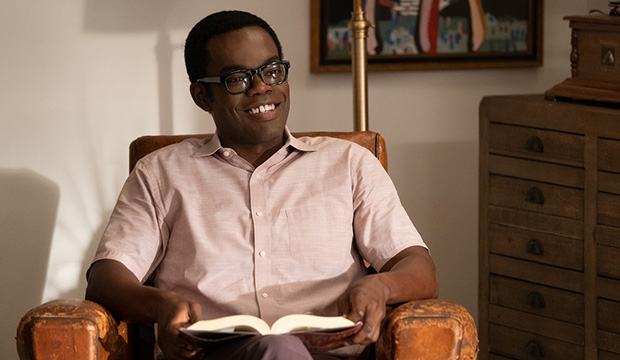 William Jackson Harper got his first Emmy nomination just in time, getting into the Best Comedy Supporting Actor lineup for the final season of “The Good Place.” Harper’s performance as the neurotic Chidi Anagonye on the NBC comedy was first celebrated by critics, who nominated him two years in a row at the Critics’ Choice Awards. Harper is submitting the episode “Whenever You’re Ready” to Emmy voters, which is the show’s series finale.

In “Whenever You’re Ready,” we see each member of Team Cockroach making peace with their time in the Good Place and deciding to end their existence by walking through a door. At the beginning of the episode, we see Chidi doing what he does best, teaching ethics, reading books and generally living a peaceful existence with Eleanor (Kristen Bell) and the rest of the gang. Eventually, he realizes he is ready to leave, but Eleanor desperately tries to get him to stay, taking him to Greece and Paris before he breaks the news to her that he intends on exiting through the door. He delivers a poignant monologue comparing life to a wave in the ocean, reassuring Eleanor before he officially ends his existence.

Can Harper win an Emmy on his first nomination? Let’s weigh the pros and cons.

That monologue. If there is one factor that could tip the scales in Harper’s favor, it’s that eloquent speech, in which he suggests to Eleanor that some part of him will still exist even when he is no longer around. Assuming Emmy voters are watching the submissions closely, there are few other submissions in the category that feature such an impactful moment. He also gets to be funny, humorously dubbing “The Da Vinci Code” a “garbage book” or geeking out while he’s at the Agora, where “the Avengers of super-thinkers” used to meet.

Emmy voters may also be looking for something new, and Harper is a perfect candidate as the only person in his category without an Emmy nomination prior to 2020. He is also in a Best Comedy Series nominee, with “The Good Place” having its best year ever at the Emmys.

The fact that it took Harper this long to earn a nomination may be a sign that his support isn’t quite strong enough to take down the numerous Emmy favorites in this category. While “The Good Place” did do well with its six nominations, it is admittedly hard to compete with actors from “Schitt’s Creek” and “The Marvelous Mrs. Maisel,” which scored 15 and 20, respectively.

While Harper’s submission is good, he is not always the focus of the episode, which is wrapping up the stories of the five other main characters just as much as Chidi. Even with that monologue, it is possible that voters will not think it’s quite enough compared to actors who have more screen time.