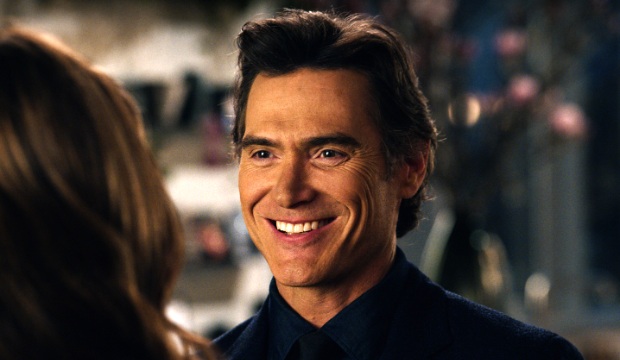 Billy Crudup celebrates his career-first Emmy nomination for playing network executive Cory Ellison on “The Morning Show.” He has submitted the third episode for TV academy consideration to support his Best Drama Supporting Actor nomination. Titled “Chaos is the New Cocaine,” the 53-minute installment was directed by David Frankel and written by co-executive producer Erica Lipez. It premiered November 1, 2019 on Apple TV+ and the official log line reads, “In a weekend of turmoil, TMS scrambles to prepare for its new future.”

Can Crudup win an Emmy for “The Morning Show”? Let’s look at the pros and cons.

Crudup has already won the equivalent Critics’ Choice Award for his performance and was nominated by the Screen Actors Guild for Best Drama Actor, a five-slot category that considers both supporting and leading performances (where he notably blocked Emmy winner Billy Porter for “Pose”). Crudup has made a career out of thankless roles in Oscar contenders, but is now earning raves as an individual. A vote for him now would double as career acknowledgement from his peers.

“The Morning Show” has eight Emmy nominations, including five for acting, but Crudup was the sole representation at Critics’ Choice, where passion for his performance evidently overcame apathy toward the show. The actor has resonated so broadly because Cory’s jittery enthusiasm contrasts the vitriol yelled by other characters. He’s just as weaselly, but he derives pleasure instead of pain from the cutthroat politics of breakfast television, so his gleeful mannerisms stand out from the heartbreak and histrionics that are par for the course on this series.

“Chaos is the New Cocaine” references a line by Cory and might as well be his motto. Although it begins with him blindsided by an announcement by “Morning Show” anchor Alex Levy (Best Drama Actress nominee Jennifer Aniston), he delights in maneuvering around this new obstacle. Crudup makes three speeches early in the episode, first to the media, then to his boss and finally to his inferiors, with his words progressing from facade to reality. The actor employs an unorthodox speech pattern, essentially by ignoring punctuation, to demonstrate his character’s frenetic excitement and thinking. He exhibits range with a more grounded approach in a later scene, in which Cory opens up about his mother to a new employee in order to motivate her.

SEE Billy Crudup discuss “The Morning Show” with his co-stars.

The winter awards have lately been more adept at anointing Emmy front-runners than winners. Sustaining buzz for almost a year is a tall order and could Crudup finds himself upset by performances from shows that debuted in the spring, like Giancarlo Esposito (“Better Call Saul”) and Jeffrey Wright (“Westworld”).

Like the three “Succession” supporting nominees (Nicholas Braun, Kieran Culkin and Matthew Macfadyen), Crudup could fall victim to vote-splitting, as he is nominated opposite co-star Mark Duplass, who was snubbed at the winter awards and plays a more prominent character in “The Morning Show.”