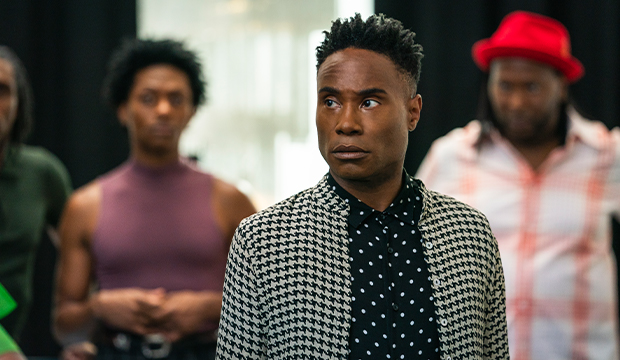 Billy Porter just earned his second Emmy nomination for “Pose” after his history-making win last year. The actor, primarily known for his theater work, became the first openly gay Black performer to win Best Drama Actor for playing Pray Tell in the FX drama. This time he is submitting the Season 2 episode “Love’s in Need of Love Today,” which could very well win him his second trophy in a row.

In this installment, Pray is emceeing a ball when he suddenly collapses after a reaction to AIDS medication. He spends much of the episode in the hospital where he is visited by the spirits of people from his past who have since died, including his rival Candy (Angelica Ross), his boyfriend and his stepfather who molested him as a child. He proceeds to perform “The Man That Got Away” in a big fantasy sequence, showing off Porter’s Tony Award-winning vocal chops.

He spars with Blanca (Mj Rodriguez) after he tells her he’s not coming to the AIDS cabaret but eventually shows up and reluctantly duets with her on a performance of “Love’s in Need of Love Today.” He eventually comes back home, has dinner at the House of Evangelista and gets another late-night visit from Candy, who taunts him about giving up, but Pray defiantly tells her, “It’s not my time.”

Will Porter win his second consecutive Emmy with this episode? Let’s weigh the pros and cons.

This submission is an absolute knockout for Porter. He gets to show off every facet of his abilities as a performer, portraying Pray’s defiant spirit, delivering two powerful vocal performances and showing a rare vulnerability as his character struggles with his mortality. Voters who are watching the episodes diligently will be hard-pressed to find a more emotional submission than this one in Best Drama Actor.

For better or for worse, Emmy voters tend to get stuck in a habit of rewarding the same people and shows over and over again, which will benefit Porter the most. It may be hard for some TV academy members to forget his speech at last year’s ceremony, and they may just want to see him deliver another one. It would also take some of the sting off of the academy failing to give “Pose” another Best Drama Series nomination.

The fact that “Pose” dropped out of Best Drama Series and failed to expand to any other acting nominations for its wealth of trans talent is not a good sign. The TV academy tends to reward actors whose shows are also nominated in the corresponding Best Series category, and he’s competing against actors who do.

While the Emmys do love repeat winners, that has not been the case in this category since 2010, when Bryan Cranston won for “Breaking Bad.” There is a distinct pattern of voters picking actors in the first season of his show or the final season, and this no longer applies to Porter.