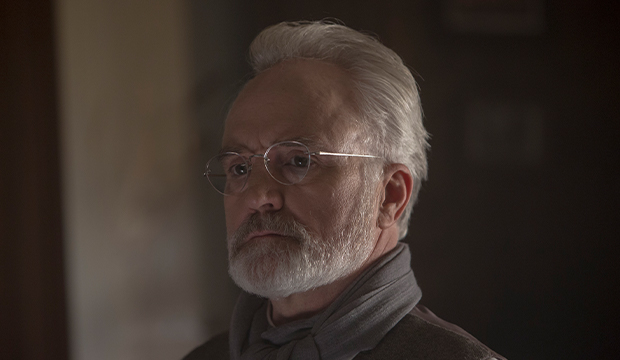 After winning the Best Drama Guest Actor Emmy for three orphaned Season 2 episodes last year, Bradley Whitford made the switch to the supporting category for the third installment of Hulu’s “The Handmaid’s Tale” with fruitful results. The actor bagged his first three career nominations in this very category for “The West Wing” (2001-03) – triumphing on his first try – which he succeeded with a pair of Best Comedy Guest Actor bids for “Transparent” (2015-16), again winning on the first bid. On his seventh citation, the three-time champ seeks to be blessed with his fourth victory by virtue of his work in his episode submission “Sacrifice,” the season’s 12th and penultimate outing.

Whitford plays Commander Joseph Lawrence, the indisputably powerful, intimidating founder of the Colonies and architect of Gilead’s economy. He’s a morally-conflicted man, who is irreverent to the state’s religious customs and unfamiliar with some of the rules he himself signed into law. After helping Emily (Alexis Bledel) escape to Canada with June’s (Elisabeth Moss) newborn baby, he takes in June as his new handmaid. While she begins to seize control and sow the seeds of resistance, Lawrence faces a reckoning as he slowly becomes an ally of the opposition.

“Sacrifice” takes place in the wake of Commander Winslow’s (Christopher Meloni) homicide (June killed him in self-defense after he tried to rape her) and the Waterfords’ arrest on Canadian soil, both developments of which are broached during Lawrence’s convening with Commanders Putnam (Stephen Kunken) and Calhoun (Jonathan Watton). Afterward, he reassuringly informs June that Winslow has provisionally been ruled a missing person and brings the happenings in Canada to her attention. When Olivia Winslow (Elizabeth Reaser) and Naomi Putnam (Ever Carradine) pay a visit to pray for the commander’s safety, Lawrence’s wife, Eleanor (Julie Dretzin), accidentally spills a detail of June’s plan to smuggle children out of Gilead, but Lawrence manages to twist her words before she can reveal too much.

After a heated phone call, in which he fulminates against the announced border closure, Lawrence demands June move up the departure date. Eleanor continues to (unintentionally) be a liability to the escape plan as she nearly walks the streets to collect additional children, but, after having to rein in a perturbed June, Lawrence tries to comfort his distraught wife with a promise of a more gleeful future. When June delivers food and drink to her room, she finds Eleanor overdosing on medication, but she leaves instead of calling for help. Wracked in guilt for not checking on his wife, Lawrence laments her passing during funeral preparations but admits to June that his loss helped sway the council to keep the border open. Finally, in a quiet ceremony, he buries his late wife.

Will Sept. 20 be another blessed day for the actor? Let’s dive into the pros and cons.

While Lawrence’s good deeds will never entirely make up for his bad ones, Whitford astutely chose an episode which casts his character in a more sympathetic light. For a change, his opening scene opposite Moss highlights his expert comedic timing in consummately delivered lines such as, “Cheer up. Fred and Serena are toast and you just got away with murder.” For the rest of the hour, however, disquiet overtakes all of his features as Lawrence frets about his wife’s well-being. This comes through peculiarly when he gently rests his hand on her shoulder upon her hazardous revealing of information regarding the escape plan. As Eleanor brings out the benevolence in the commander, Whitford’s line reading opposite Dretzin is accordingly serene, most noticeable in his tender delivery of, “We’ll leave all this behind. All of it.” Perhaps his most impactful scene comes at the very end, when the actor credibly but subtly pours out Lawrence’s grief, as he shows June Eleanor’s favorite bottle of wine, which he was saving for their anniversary.

The 2017 Best Drama Series champion, “Handmaid’s” has produced 17 nominations and six wins for its actors thus far, including both guest acting prizes at last years Emmys (Cherry Jones triumphed on the actress side). While “Succession’s” three (Nicholas Braun, Kieran Culkin and Matthew Macfadyen) and “The Morning Show’s” two (Billy Crudup and Mark Duplass) nominated actors could potentially split the vote, Whitford – who in a lineup of eight actors needs just a bit over 12 per cent of the vote to be pushed over the finish line – can soak up all of the support for his show (“Better Call Saul’s” Giancarlo Esposito and “Westworld’s” Jeffrey Wright round out the lineup).

With three previous victories under his belt, including one for “Handmaid’s,” voters may feel Whitford has been amply recognized for his achievement on the small screen. Four of the other nominees (Braun, Crudup, Culkin and Macfadyen) are rookie contenders, while four-time nominee Esposito is overdue for a first victory (both Duplass and Wright are previous victors for other projects). Perhaps voters will want to spread the wealth a little bit.

While “Handmaid’s” returned to a healthy 10 nominations, including one for Best Drama Series, the show halved its total from the last time it was fully eligible in 2018. It particularly took a hit in the acting races, in which it went from eight noms in ’18 to just three this year – the other two being for Bledel in guest and Samira Wiley in supporting – with the show’s center of gravity, Moss, glaringly missing out for the first time. Whitford’s submission can certainly still pack a punch, but despite featuring an enthralling arc for his character, he ultimately boasts sparser collective screen time than desired.