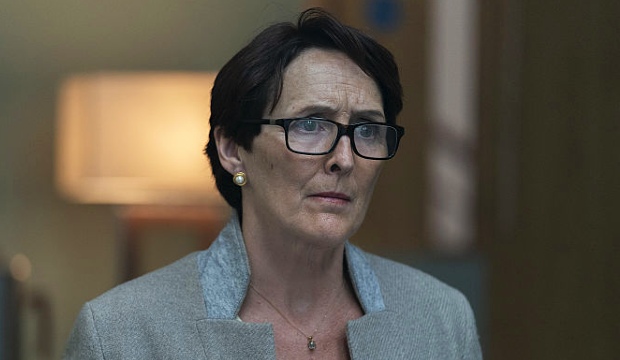 Fiona Shaw has her second consecutive Best Drama Supporting Actress nomination for playing MI6’s Carolyn Martens on BBC America’s “Killing Eve.” She has submitted the episode titled “Management Sucks” for Emmy judging. The 41-minute installment was written by Anna Jordan and directed by Terry McDonough. It aired April 19, 2020 on BBC America as the second episode of the third season. An official log line reads, “Eve strikes up an unlikely alliance and Villanelle finds that management isn’t all it’s cracked up to be.”

Can Shaw win? Let us look at the pros and cons.

Shaw had her strongest season yet, as Carolyn grapples equally with losing her son Kenny (Sean Delaney) and living with her daughter Geraldine (Gemma Whelan), both of which begin in Shaw’s submission. Carolyn starts it at Kenny’s funeral, but is back at work in her next scene. She wants to investigate the death, so she manipulates Eve (Best Drama Actress nominee Sandra Oh) into helping her.

Carolyn could be little more than comic relief or a sounding board in previous seasons, but this season sees Carolyn leading her own story lines with dramatic heft. “Management Sucks” is a strong submission, because of the sympathy that the narrative mines for Carolyn and from the broadly theatrical beats that Shaw gets to play when Carolyn separately cries and is drunk.

Julia Garner (“Ozark”) won Best Drama Supporting Actress last year over Shaw and there is little evidence to suggest that the outcome would flip. “Killing Eve” is down a nomination this time and “Ozark” is up nine. Shaw individually now also lacks the momentum and goodwill that she had last time from respectively winning the equivalent BAFTA for “Killing Eve” and receiving an Emmy nomination for “Fleabag” in Best Comedy Guest Actress.

Vote-splitting might have figured heavily into the Best Drama Supporting Actress race last year, with “Game of Thrones” occupying four of the six slots, so Shaw had a clear path to the win then against Garner. There are more variables this time, as Shaw is up against seven actresses from six other dramas, four of them Emmy-winning performances already: Laura Dern (“Big Little Lies”), Thandie Newton (“Westworld”), Samira Wiley (“The Handmaid’s Tale”) and Garner.