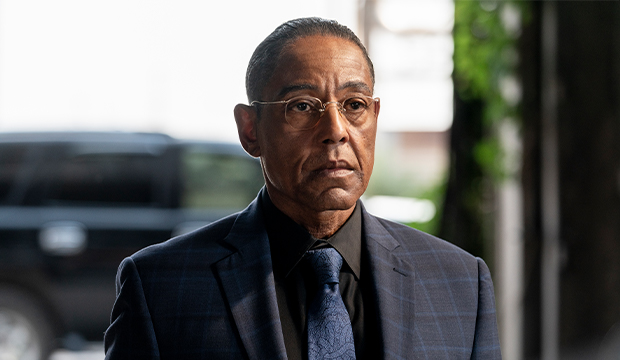 Giancarlo Esposito is a dual Emmy nominee this year, landing a second consecutive Drama Supporting Actor nod for his work on “Better Call Saul”; he is also up for Drama Guest Actor for Disney Plus’ “The Mandalorian.” For his “Better Call Saul” bid, he has submitted the seventh episode of the fifth season, “JMM.” Esposito reprises his iconic role from “Breaking Bad,” Gus Fring: charming head of fast food chain “Los Pollos Hermanos” by day, menacing drug boss by night. His submitted episode sees his character plot moves in the drug war with the Salamanca family.

In “JMM,” Gus is at a board meeting presenting his new “Spicy Curls,” which he describes as “the curly fries with the South Western kick.” They are a big hit with Peter (Norbert Weisser), the CEO of the parent company. Back at his hotel room, he puts on the “Do Not Disturb” sign and meets with Lydia (Laura Fraser) and Peter, where they discuss the best way to handle the Salamancas. Back at “Los Pollos Hermanos,” Nacho (Michael Mando) destroys the store, while Gus meticulously sets up a contraption involving an uncooked chicken in the deep fryer. Gus walks away from the store, which then explodes behind him, a move that will no doubt escalate the drug war.

Can Esposito win his first Emmy for this episode? Let’s take a look at the pros and cons.

Walking away from the exploding fast food store is a bad-ass and memorable moment that will stay in voter’s minds. The entire performance is actually powerful in its silence. This a menacing and iconic character, and every moment he’s onscreen, he has your attention.

From the board meeting to the end of the hotel room scene, Esposito is present for seven minutes straight, a solid amount of uninterrupted time to have your acting talents on display.

This is Espositio’s second nomination for “BCS,” but he also received a nomination for playing Gus in “Breaking Bad” in 2012, a bid many people think he should have won (including his “BB” costar Aaron Paul, who beat him that year). He’s certainly overdue, and being nominated for “The Mandalorian” could give voters more reason to recognize him.

“Better Call Saul” is a Best Drama Series nominee, which gives him a leg up. Plus, he’s the only actor the academy can award from the show this year.

This is a quiet and understated performance, with no big shouting or crying scenes, and this can often prove costly with award voters (case in point, Esposito losing to Paul in 2012). It might not help that the first time we see Gus is in the second half of the episode. That’s a lot of time for voters to wait to see his performance.

“BCS” has never won an Emmy, and this year the acting branch snubbed prior nominees Bob Odenkirk and Jonathan Banks, as well as critical darling Rhea Seehorn. Perhaps it does not have the support Espositio needs in the acting branch.

His nomination for “The Mandalorian” could mean that actors who want an Espostio win will vote for him in the guest category.