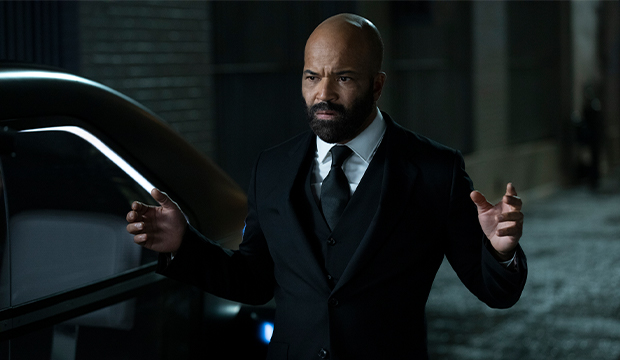 Jeffrey Wright received his third Emmy nomination for his performance as Bernard Lowe on HBO’s “Westworld.” He had previously won in 2004 for reprising his Tony-winning performance in Mike Nichols‘s miniseries adaptation of Tony Kushner‘s award-winning play, “Angles in America.” His episode submission for this year is the season finale, “Crisis Theory.”

In this episode, Bernard takes Ashley Stubbs (Luke Hemsworth) to a motel room after getting shot by William (Jimmi Simpson). Bernard later realizes that the AI computer system, Rehoboam, was not trying to prevent the collapse of civilization, but was working to delay it as long as possible. He also realizes that Dolores Abernathy (Evan Rachel Wood) had put the key to the virtual world, Sublime, in his mind. Bernard enters into the Sublime to learn how humanity can rebuild, while also appearing to go idle to Stubbs.

Can Wright win an Emmy for his work on “Westworld” this year? Let’s dive into the pros and cons.

When the second season contended at the Emmys two years ago, Thandie Newton pulled off a surprise win for Best Drama Supporting Actress over the presumed frontrunner, Yvonne Strahovski (“The Handmaid’s Tale”). Newton’s win there could be a sign of how much the actors branch are growing to appreciate the performances on the show.

While “Westworld” did miss the cut for Best Drama Series for the first time this year, that hasn’t stopped performers from triumphing in this category. Look no further than Bobby Cannavale for “Boardwalk Empire” in 2013 and Terry O’Quinn for “Lost” in 2007. Both actors won for seasons where their respective shows got snubbed in the top category after previously competing (and it “Lost’s” case, actually winning).

Not only did “Westworld” miss the cut for Best Drama Series this time, but the third season also underperformed in Emmy nominations overall, even missing Wood in Best Drama Actress after two bids. That could be a sign of how little support there is for the show this year.

Though it’s happened before, it’s rare for this award to go to a performer in a show that isn’t nominated for Best Drama Series. In fact, it’s only happened four times this century: Cannavale, O’Quinn, Ben Mendelsohn (“Bloodline” in 2016) and William Shatner (“Boston Legal” in 2005).