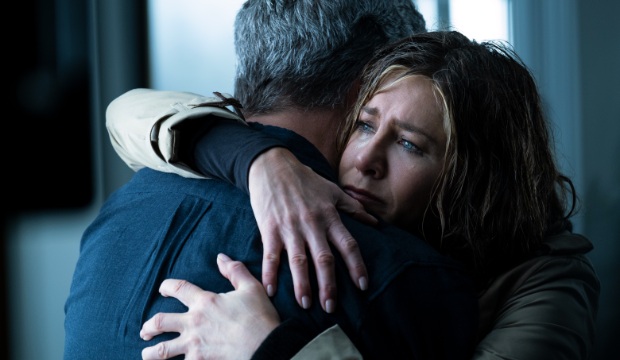 Jennifer Aniston has her first Emmy nomination in 11 years for playing breakfast television host Alex Levy on “The Morning Show.” She has submitted the pilot episode for TV academy consideration to support her Best Drama Actress nomination. Titled “In the Dark Night of the Soul It’s Always 3:30 in the Morning,” the 63-minute installment was directed by Mimi Leder and written by Kerry Ehrin and Jay Carson.

The episode premiered November 1, 2019 on Apple TV+ and the official log line reads, “America’s favorite morning news show is thrown into crisis when it becomes the news.” Can Aniston win an Emmy for “The Morning Show”? Let’s dive into the pros and cons.

Aniston is playing against type by giving a dramatic performance. This is her first Emmy nomination in the drama field after six in comedy, all from the first decade of the 2000s, including a Best Comedy Actress win for her iconic role as Rachel Green on “Friends” in 2002. This background accentuates every dramatic beat that Aniston hits in “The Morning Show,” as voters not only consider this work on its own merits, but contextualize it with what they know — or what they thought that they knew — about her capabilities. Actors iconic for sitcom performances who won recently for continuing drama series include Bryan Cranston (“Breaking Bad”) and John Lithgow (“The Crown”).

Aniston has already won the equivalent Screen Actors Guild Award and received a Golden Globe nomination for this bombastic performance. “In the Dark Night of the Soul It’s Always 3:30 in the Morning” ticks off all of the boxes as awards bait for Aniston. Pilots are a solid bet to submit because they are designed to make for accessible viewing by design. The episode introduces Alex — in a sympathetic position, as she reacts to the sexual misconduct allegations against her long-time professional partner played by Best Drama Actor nominee Steve Carell. Scenes opposite Oona Roche as her on-screen daughter are when Aniston most has her work cut out for her.

This is a loud performance in a literal sense, as Aniston yells a great many of her lines in “In the Dark Night of the Soul It’s Always 3:30 in the Morning,” often during scenes when tensions are running high. The timely #MeToo subject matter provides extra heft. Aniston runs the gamut of emotions, as she experiences anger, betrayal and sadness. Aniston even gets to cry in the episode.

Aniston rode an against-type narrative for the 2014 film “Cake,” only to come up short at the end of that awards season. She received SAG, Globe and Critics’ Choice Award nominations for her deglamorized work in that drama, but was snubbed for Best Actress at the Oscars. Perhaps her peers looked down on her career in romantic comedies that yielded four Razzie nominations.

SEEa conversation with “The Morning Show” cast and crew.

“The Morning Show” received a negative label from Rotten Tomatoes’ “top critics” and was snubbed as such for Best Drama Series, even with the Emmys adding an eighth nomination slot for the first time. A single Emmy last year went to a drama that had been snubbed in Best Drama Series: Best Prosthetic Makeup for “Star Trek: Discovery.”

The snub of “The Morning Show” in series is demonstrative of the Emmys’ shift toward subtlety, away from hammy melodramas and laugh-track sitcoms. These sensibilities manifested further in the nominations, as “Succession” led with nine for acting.