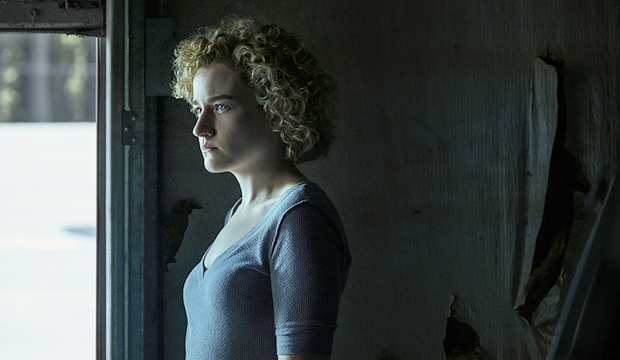 “I said I’m f***ing done!” Julia Garner’s Ruth Langmore thunders to “b**** wolf” Wendy Byrde (Laura Linney) in the third season of “Ozark” – but that might not be the case for the actress at the Emmys. After garnering the Best Drama Supporting Actress award for the Netflix series’ second season on her career-first attempt last year, she is now back in the running and fully prepared to defend her crown by means of her episode submission to Emmy judges, “In Case of Emergency,” the third season’s seventh outing.

After a calamitous second season for her, the third one sees Ruth primarily back on her feet as she co-manages the Missouri Belle’s casino operations alongside Marty (Jason Bateman). But matters swiftly take a dramatic turn in the episode that precedes Garner’s Emmy submission, in which Ruth watches as unknown parties in black SUVs gun down members of the Kansas City mob – who were tasked with dropping off cash – before eventually blowing up their truck, killing all of Frank Cosgrove Jr.’s (Joseph Sikora) men.

SEEEmmy predictions slugfest: Will Best Drama Writing and Directing winners be a split or sweep? [WATCH]

“In Case of Emergency” opens with two FBI agents questioning Ruth about the incident, of which she denies any knowledge. They try to push her into a corner by making mention of how she never followed up on the investigation into her father’s death, but she doesn’t fall into their trap. In the car, she worriedly confronts Ben (Tom Pelphrey) – Wendy’s brother – about his bipolar disorder and going off his medication, but he sincerely asks for her to trust him. Later, at the casino, an enraged Frank Jr. blames Ruth for the fatal incident before beating her up after shift, sending her to a hospital bed.

When Marty and Wendy turn up at the hospital, they ensure a severely bruised Ruth that they have broken off all ties with Frank Sr. (John Bedford Lloyd) to protect her, but that isn’t enough for her; she wants him taken out. After the Byrdes reject her demand, she irately concludes that she’ll then have to do it herself, accentuating that her safety depends on it. At home, Wyatt (Charlie Tahan) – who hasn’t spoken to her since she confessed to having killed his father at the end of Season 2 – finally pays a visit to his cousin, who faults herself for all the turmoil surrounding the Langmore family, the blame for which Wyatt contrarily lays on the Byrdes.

SEEJason Bateman (‘Ozark,’ ‘The Outsider’) on what inspired both shows [Complete Interview Transcript]

Can Garner go two for two at the Emmys? Below, let’s explore the pros and cons.

She could pull off what only “Game of Thrones’” Peter Dinklage has been able to do at the Emmys recently: score back-to-back drama acting victories under the new voting system. After winning his first two statuettes four years apart from each other in 2011 and ’15, he claimed his third and fourth ones consecutively in 2018 and ’19. He was the first actor to win for “Thrones,” just how Garner was the first to win for “Ozark.” Like Dinklage’s character Tyrion Lannister on “Thrones,” Garner’s Ruth Langmore has become the arguable fan favorite on “Ozark.” Both characters are outlandishly entertaining and celebrated for their cheeky zingers, while their portrayers have been hailed for skillfully grounding them. Hence, if anyone can follow in Dinklage’s footsteps, it’s Garner.

In “In Case of Emergency,” the actress gets to dive head-first into the complexities that make her character so multifaceted. After appearing strong and resilient during her questioning, Ruth’s vulnerability surfaces the minute she is opposite Ben, the man to whom she slowly but hesitantly opens throughout the season. The core theme of the episode, Ruth’s identity crisis, is then peculiarly explored in two vital scenes: her conversations with the Byrdes and Wyatt, respectively. Garner radiates fear and fury simultaneously in the former, while she is beautifully tender in the latter. Not only does the episode start and end on the actress’ face, but it chronicles her character’s path to self-acceptance and independence, after she has spent most of her life torn between loyalties to different men.

Last year, Garner triumphed when “Ozark” had nine nominations. This year, it shot up to a mountainous 18, including another for series, tying “Succession” as the most shortlisted drama series at this year’s awards. It’s not hard to imagine Garner triumphing for a season that has double the support of her winning one and came out at a more beneficial time – namely, at the beginning of the coronavirus pandemic and in the heart of Emmy season. Plus, in a lineup of eight actresses, she needs just a bit over 12 per cent of the vote to prevail as opposed to 16 per cent last year.

Although Garner has a lot going for her that suggests she could follow in Dinklage’s footsteps, she would be only the seventh person in her category to accrue back-to-back successes and the first since Anna Gunn, who won for “Breaking Bad” in 2013 and ’14. On the drama side, the wealth is now frequently spread, both from year to year and within a single year, with all four main acting categories going to different shows in the last two years, respectively. Since Garner already has an Emmy under her belt for “Ozark,” voters might look toward either one of her two nominated co-stars, leads Linney – who tops our odds – and Bateman, to reward this time around.

“Ozark” added bids almost everywhere across the board except for in the acting categories, in which it’s represented by the aforementioned trio for the second year in a row. Pelphrey and Janet McTeer – who plays Helen Pierce, the ruthless attorney for Mexico’s Navarro drug cartel – both egregiously missed out on nominations despite being widely predicted for their scene-stealing turns in the third season. If the support from the actors’ branch for “Ozark” has stagnated, might it not be enough to push Garner over the finish line a second time?