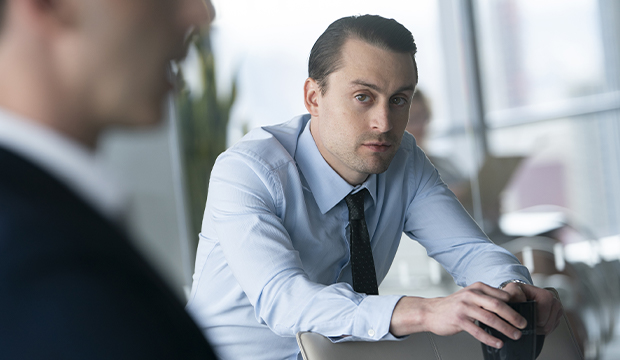 “My life just ended,” Kieran Culkin’s Roman Roy whimpers when his sister blurts out that she’s been chosen as the successor to their father’s empire in “Tern Haven,” the second season episode of HBO’s “Succession” that he has submitted for Emmy Awards consideration. Culkin has scored his first-ever nomination in the Drama Supporting Actor category for his role as the unflappably unserious but ambitious son of media magnate Logan Roy (Brian Cox) after earning two Golden Globe bids for the performance.

In “Tern Haven,” the entire Roy clan descends on the Pierce family’s eponymous estate to negotiate an acquisition. Culkin’s Roman gets his marching orders from Logan to focus on wooing Naomi (Annabelle Dexter-Jones), a key influence on whether or not Nan Pierce (Cherry Jones) will agree to a sale. At dinner, the Roy family’s foibles––especially Roman’s––are on full display as his girlfriend Tabitha (Caitlin Fitzgerald) humiliates him personally and his sister Shiv (Sarah Snook) usurps him professionally. Those indignities lead Roman to general counsel Gerri’s (J. Smith-Cameron) door in the middle of the night, where they escalate their perversely intimate mentor-mentee relationship.

Will Culkin’s sardonic yet sympathetic performance nab him an Emmy on his very first outing? Let’s look at the pros and cons of his submission.

Culkin chose a terrific episode for his Emmy showcase, as he gets to balance his characteristic sarcasm with real emotional depth. For the first half, he play up Roman’s sly, jocular attitude, offering hilarious quips about the Pierce family and his own. Culkin digs much deeper in the second half, especially as he reacts to both his inability to sleep with his girlfriend and his public shame at being passed over for his sister. Roman’s devastation is written all over Culkin’s face and body language, and his frustration and disappointment is by turns endearing and disturbing. His biggest scene is opposite Gerri, who Roman looks to for solace, and he finds it when he gets off––literally––to her excoriating him. The scene and his performance are simultaneously icky, funny and utterly engrossing.

Culkin has a leg up on some of his competition as voters will get a second look at his performance in the submissions of co-stars Nicholas Braun and Matthew Macfadyen: the season finale “This Is Not for Tears.” In that episode, the Roys convene on their yacht to debate who will take the fall for the company’s insidious cruise-line scandal, and Roman finally wins his father over with his business savvy. If voters watch the entries in all categories, they’ll also see the actor in four more episodes, giving them a great sense of the complexity of his character.

Though Golden Globe members took a liking to Culkin’s performance from the first season, the Emmy acting branch just recently caught up with the series, as evinced by its skyrocketing performer nominations from zero to nine. If voters have the entire series on their minds when they cast their ballots, he will have a further advantage as he had a memorable arc in the first season, first siding with his brother’s coup-attempt against Logan and then staying on as his father’s COO.

Even though “Tern Haven” features a great subplot for Culkin, the episode mostly revolves around Snook’s character Shiv, who makes a tremendous blunder when she forces her father’s hand at announcing her as his successor at dinner, but nevertheless becomes essential to the negotiations with Pierce. Voters might think his character feels too peripheral in his submission to award him with the prize.

With three “Succession” contenders in Drama Supporting Actor, it seems inevitable that they will split the votes since none of them feels like the consensus choice. Despite this obstacle, there is recent precedent that could benefit Culkin: just last year, Emmy-juggernaut “Game of Thrones” had three bids in this category for Peter Dinklage, Alfie Allen and Nikolaj Coster-Waldau, and Dinklage prevailed. Culkin seems like the Dinklage of his “Succession” cohort as a quasi-lead frontrunner, which bodes well for his chances.

In addition to fending off his fictional cousin and brother-in-law, Culkin will have to beat out a murderers’ row of supporting contenders, including “The Morning Show” duo Billy Crudup and Mark Duplass, double-nominee Giancarlo Esposito (“Better Call Saul”), last year’s Drama Guest Actor winner Bradley Whitford (“The Handmaid’s Tale”) and returning-nominee and past Emmy champ Jeffrey Wright (“Westworld”).