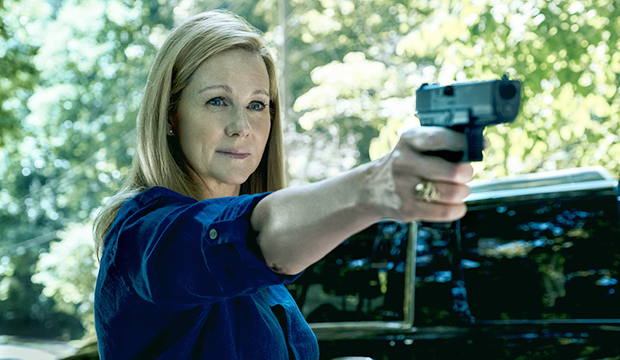 No one does the Emmys like Laura Linney, who parlayed four of her six past nominations into victories, prevailing for “Wild Iris,” “John Adams” and “The Big C: Hereafter” in Best Movie/Mini Actress (2002, ’08, ’13), and for “Frasier” in Best Comedy Guest Actress (2004). Her other two bids are for “The Big C” in Best Comedy Actress (2011) and “Ozark” in Best Drama Actress (2019), in the latter of which she’s shortlisted again this year for the gritty Netflix series’ third installment. On her seventh career citation, the actress is looking to grab her fifth statuette thanks to her submission to Emmy voters, “Fire Pink,” the season’s ninth and penultimate effort.

In Season 3, her character Wendy’s bipolar brother Ben Davis (Tom Pelphrey) turns up in the Ozarks, creating more problems than desired. Initially in the dark about his sister’s adherence to the Navarro drug cartel, he publicly confronts Wendy about her involvement in Ruth’s (Julia Garner) dad’s homicide at a fundraising event in episode 8. After he is released from the state mental hospital to which he was committed, he accosts Helen (Janet McTeer) – the cartel’s tough-as-nails attorney – at her mansion, outing her criminality to her present daughter Erin (Madison Thompson).

SEEEmmy predictions slugfest: Will Best Drama Writing and Directing winners be a split or sweep? [WATCH]

Just as Helen shows up at the Byrdes’ house in “Fire Pink,” Wendy receives a call from Marty (Jason Bateman), who informs her about the preceding calamitous faceoff. In front of Helen, the married couple tries to pretend as though they’re unaware of the detrimental encounter, but Helen quickly puts an end to the charade. Wendy’s assurance that she’ll convince her daughter that her brother was making up lies is rendered meaningless when Erin barges in and calls out her mother after ascertaining the truth from Charlotte (Sofia Hublitz) and Jonah (Skylar Gaertner). Fully cognizant of the danger in which Ben now finds himself, Wendy flees with him.

On their first stop, the two siblings joke around and reflect on their lives, before Ben sneaks off during the night to report that he’s being chased by the Navarro cartel, so that Wendy has to fend off a policer officer on the next morning. Ben’s condition only worsens as he calls Helen on a burner phone and buys another one after Wendy destroys it. Perturbed, she is forced to act upon realization that her brother’s disorder poses an interminable threat to her family’s well-being. Hence, she remorsefully reveals Ben’s whereabouts to Helen, whose henchman awaits him out outside the diner at which Wendy left him. On the phone with Marty in the car, she finally breaks down and bursts into tears.

SEEJason Bateman (‘Ozark,’ ‘The Outsider’) on what inspired both shows [Complete Interview Transcript]

Will Linney grab her first Emmy under the new voting system? Let’s dissect the pros and cons.

The actress sat out for “Ozark’s” debut season – for which lead actor Bateman was the only acting nominee – before making the cut for the second one last year, when the show racked up a total of nine bids, including a first for drama series. Bateman and Garner walked home with the directing and supporting actress statuettes, respectively, which boasted unexpected support for the show. Little did we know that, one year later, it would skyrocket to 18 total nominations, with which it ties “Succession” as the most nominated drama series at this year’s awards. Since her two co-stars have already been crowned for their (partial) work on this show, Linney could be next in line.

A lot of the uproarious adulation for “Ozark’s” third season can be chalked up to Wendy’s enlarged role and Linney’s tremendous work in it, “Fire Pink” being not only a season but a series highlight. The actress runs the gamut of emotions as Wendy is resilient, fearful, angry, panic-stricken, sorrowful — you name it at different stages in this episode — and sometimes, all at once – with the love for her brother at the center of it all. “This is real!” Wendy excruciatingly makes explicit to Ben, who is putting everyone in a most precarious position. But Linney crucially radiates commiseration as Wendy is fully aware that it’s her brother’s mental disorder that is dictating his every (reckless) action. The realization of the step she has to take is as heartrending to watch as her visceral outpouring of anguish and woe at the end, which is arguably Linney’s most astounding scene in this episode. If tapes still matter, this one could catapult Linney to the very top.

Linney bagged all four of her victories under the old voting system, in which winners were selected by a blue-ribbon panel via a ranked ballot. She has only been nominated once under the new system, last year, but she lost to “Killing Eve’s” Jodie Comer, who is back in the running this year and exemplifies a recent shift that has come with the new voting system. As all non-program categories are voted on by entire corresponding peer groups via a popular vote, we’ve seen breakthrough performers and overdue thespians frequently favored. While Linney doesn’t fit either bill, some of her rivals do: three-time nominee Olivia Colman (“The Crown”) and 12-timer Sandra Oh (“Killing Eve”) have never won an Emmy, while, at 24, Zendaya (“Euphoria”) is celebrating her first nom for a revelatory turn. A past champion, Jennifer Aniston (“The Morning Show”) also doesn’t fit into either group, but she has the narrative of finally returning to TV and making the jump to drama behind her.

Linney’s onscreen brother Pelphrey and nemesis McTeer missed out on acting nominations despite being widely predicted, turning in two of season 3’s most scene-stealing turns and presumably never being eligible for “Ozark” again. Bateman and Garner did retain their nominations, but just three acting mentions for the show could be a sign that the support from actors isn’t as strong as anticipated, especially considering that it significantly added citations almost everywhere else across the board.