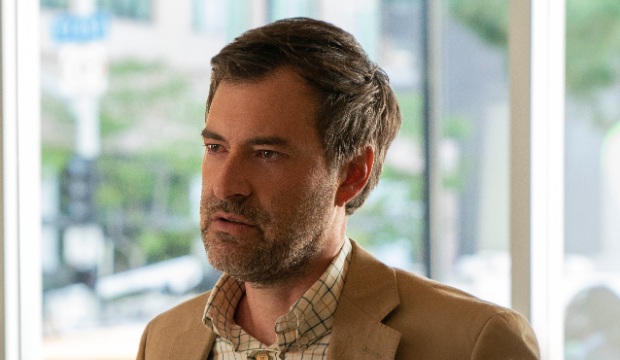 Mark Duplass is an Emmy Award nominee for Best Drama Supporting Actor with the role of breakfast television producer Chip Black on “The Morning Show.” He has submitted the season finale for academy consideration. Titled “The Interview,” the 66-minute installment was directed by executive producer Mimi Leder and written by showrunner Kerry Ehrin. It debuted December 20, 2019 on Apple TV+ and the official log line read, “TMS faces a fateful day as a plan to shake up UBA is set in motion.”

Can Duplass win for this episode? Let’s take a look at the pros and cons.

This is Duplass’s first Emmy nomination for acting, but he won two years ago for executive producing the documentary series “Wild Wild Country.” He could benefit from the goodwill that he has built up over his career as an auteur independent filmmaker; Duplass has more credits as a producer than an actor, not to mention his resumes as a director and screenwriter.

Chip is almost a leading role, which always helps in a supporting category where some competitors might be competing with borderline guest spots. The first scene of the series is one of Duplass alone and he appears in all 10 episodes of the first season, unlike leads Steve Carell and Reese Witherspoon.

“The Interview” is a great showcase for Duplass because it’s a terrible chapter for Chip. He is fired from the eponymous show-within-a-show and tries to take the network president down with him. Chip is frazzled, scheming, vindictive and overall acting like a man with nothing to lose. Late in the episode, he learns that a staffer has died from an overdose, prompting him to physically attack Carell’s character.

The finale is an episode of heightened emotions, with Duplass giving a loud and physical performance. His aggression avoids grating viewers because his motivations remain sympathetic, with Chip even revealing that he was the one behind the leak of the sexual misconduct allegations — the inciting incident of the series.

Co-star Billy Crudup is the category front-runner after winning the equivalent Critics’ Choice Award and picking up a nomination from the Screen Actors Guild, so Duplass is more of a spoiler than a dark horse. While he’s unlikely to leapfrog his co-star this first time in contention against him, he could draw enough votes away from Crudup to cost him the win.

Dramas snubbed in Best Drama Series, as “The Morning Show” was, rarely win Emmys these days, especially for acting. Though it admittedly has an impressive amount of acting nominations, Crudup and Duplass compete against performances from “Succession,” a Best Drama Series frontrunner with three contenders in this category (Nicholas Braun, Kieran Culkin and Matthew Macfadyen). If any program is capable of overcoming vote-splitting, it would likely be “Succession,” not “The Morning Show.”