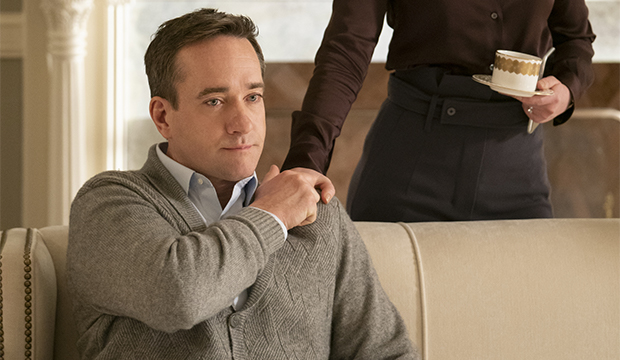 After years of notable roles, Matthew Macfadyen could be on the brink of winning his first Emmy. He scored his first bid in Best Drama Supporting Actor for playing Tom Wambsgans, the submissive husband of Shiv Roy (Sarah Snook) and the head of Waystar Royco’s news outlet. He has selected the season two finale, “This is Not For Tears,” as his episode submission.

At breakfast the next morning, various names are batted around as to who should take blame for the cruise line scandal. Several argue that as head of the division at the time, Tom would make sense. He tries to defend himself but is caught off-guard when Shiv agrees, claiming she’s doing this to support him. Later, they have some private time on a cove, and Tom says he felt betrayed. This leads him to completely let loose about how he doesn’t want an open marriage and that he’s still can’t believe she asked for the arrangement on their wedding night. He admits he’s frequently unhappy and wonders aloud, “if the sad I’d be without you would be less than the sad I get from being with you.” Shiv apologizes and says she’ll persuade Logan (Brian Cox) not use him as a scapegoat, but Tom maintains he’ll make the case himself. When they return to the yacht, he sits next to Logan, who is about to eat lunch. Completely stone-faced, Tom reaches to his plate and grabs a piece of chicken off of it, quickly devours it and throws the bone back on to the plate. He leaves the table with his father-in-law dumbfounded.

Let’s examine the pros and cons that this episode brings to Macfadyen’s chances.

This episode let us see Tom in a vulnerable manner that we’ve never seen him in before. The scene in the cove where he’s honest about all the insecurities he has about his relationship with Shiv is absolutely heartbreaking and he delivers it with the maximum amount of impact, especially with his line about whether he’d be less sad without her in his life.

Macfadyen gets a great bit of range in the episode. In addition to the vulnerability in the cove scene we get to see him being nervous around the other Roy family members, wielding power over Greg and completely confident in standing up for himself by eating Logan’s chicken, even if the elder Roy doesn’t know what to make of it.

“Succession” is the widely predicted frontrunner for Best Drama Series, so it stands to reason it could take home a couple acting prizes for its acclaimed ensemble. Macfadyen could get carried along in a sweep.

Macfadyen is up against Braun and Culkin in this category. Plenty of actors have won while being nominated against several co-stars, but this still complicates his chances. It doesn’t help that Culkin has several great scenes in this submission while Macfadyen doesn’t have those kind of standout moments in Culkin’s episode, “Tern Haven.”

After the scene of Tom eating the chicken, he basically disappears except for a couple of moments where he’s seen alongside the rest of the Roy family. The lack of a catharsis about where Tom stands amidst everything that’s going on could affect how some voters view Macfadyen’s performance.