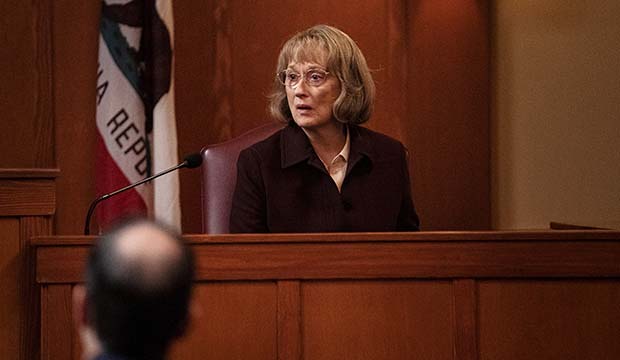 She joined the second season as Mary Louise Wright, the cunning, grieving mother of her late son Perry (Alexander Skarsgard), Celeste’s (Nicole Kidman) abusive husband. While she comes to town to make sense of her son’s mysterious death, she soon engages in a custody battle for her two grandchildren, whom she deems unsafe under Celeste’s wing. After Celeste is put on the stand and iniquitously confronted with a number of personal, derogatory questions from Mary Louise’s lawyer, she demands that her mother-in-law’s mothering skills be equally put into question.

On the stand in “I Want to Know,” Mary Louise openly recognizes Celeste’s commitment as a mother but considers her an “imminent peril” to Max (Nicholas Crovetti) and Josh (Cameron Crovetti). Celeste directs this imputation right back at Mary Louise by inquiring about whether her lashing out caused the car accident that killed her other son, Raymond. A wrought Mary Louise comes apart at the seams when Celeste points to a disregard of Perry’s trauma and her blaming him for the accident as the cause for his eventual violent tendencies. Under the belief that her son is the victim in this case, Mary Louise is nauseated by an ensuing recording Celeste presents to the court, in which Perry’s horrific abuse is caught on camera by their two sons.

In a last-minute attempt to win the case, she asks to be heard in court, averring that, while ashamed of her son’s behavior, she regards the abuse as a mutual offense and asks for her grandchildren to reside with her while Celeste takes some time to heel. But the judge sides with Celeste, who is granted continued full custody of her two boys, after which Mary Louise quietly leaves town.

Will the actress unleash a scream of joy on September 20 as she adds another Emmy statuette to her shelf? Let’s dive into the pros and cons.

With 21 bids and three wins, Streep is the most nominated performer at the Academy Awards, and with 32 bids and eight wins, the most nominated and rewarded individual at the Golden Globe Awards. On name alone, the actress could draw votes from her peers in the TV academy, who have given her the Emmy on three out of four occasions. This year, she contends for a series which claimed eight statuettes when it competed as a limited series on its first go-around in 2017, three of which were for acting: Kidman in lead, Skarsgard and Laura Dern – who is nominated alongside Streep – in supporting.

Earning her Critics’ Choice Award and Globe citations earlier this year, her turn as Mary Louise on “Lies” is dissimilar to any of her past lauded work. In her submission, we see her intricate character’s every facet, with all of Streep’s line readings, gestures and facial mannerisms deliberately revealing details relating to her personality and/or past. Streep consciously shatters the “mother-in-law from hell” label that was quickly assigned to her character, who, in reality, is a woman that willed herself to look past her son’s indecency to keep her own fault, and thus self-guilt, buried. But as Celeste digs it up in court, Mary Louise falls to pieces, played brilliantly by Streep, whose sorrowful gasp is just as striking as her abdominal scream in the premiere. At the same time, in Mary Louise’s eyes, her own child’s memory is being assassinated in front of her, which surely is any mother’s worst nightmare. All in all, Streep turns Mary Louise into a fully realized human being, who, yes, is unquestionably flawed, but for whom you feel some sort of sympathy by the time Max and Josh go to hug grandma after the verdict is pronounced.

At this point in her career, a lot of Streep’s work might be taken for granted. Recently, the Emmys have moved away from rewarding bigger names and gravitated toward breakout stars or overdue industry vets (three of the last year’s four main drama acting winners were first-time nominees). This could also explain why, despite favorable odds, Streep was bested at both Critics’ Choice and the Globes – by “Watchmen’s” Jean Smart and “The Act’s” Patricia Arquette, respectively, neither of whom are, however, competing against Streep at the Emmys. Since she already has as many Emmys as her category sisters combined, voters might not feel the urge to crown a fourth time.

She faces internal competition from recent Oscar champ Dern, whose firecracker of a character, Renata Klein, produced as many, if not more, viral moments as/than Mary Louise last summer. While all the acting-branch support for “Lies” can coalesce around both actresses since they are the show’s only acting noms this year, the fact that the branch went from shortlisting it five times for season 1 to just twice for season 2 could indicate sparser support (“Lies” fell from 16 total bids in 2017 to just five this year). If it’s then split up evenly between Dern and Streep, it could be difficult for either one to prevail, when all six of their rivals – Helena Bonham Carter (“The Crown”), Julia Garner (“Ozark”), Thandie Newton (“Westworld”), Fiona Shaw (“Killing Eve”), Sarah Snook (“Succession”) and Samira Wiley (“The Handmaid’s Tale”) – contend as their respective shows’ only mention in this category.