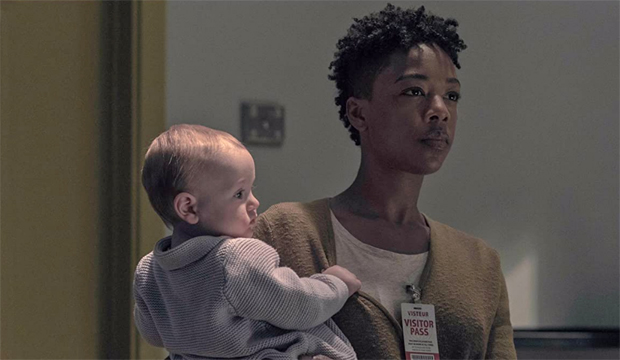 A Best Drama Supporting Actress nominee for “The Handmaid’s Tale’s” debut installment in 2017 and a Drama Guest Actress champ for its second in 2018, Samira Wiley has been sent good weather for the third time in a row, earning another blessed drama supporting actress citation for the Hulu series’ third season. Now, the actress hopes to scoop up her second victory and shout “Praise be!” on September 20 with the help of her episode submission, “Sacrifice,” the season’s 12th and penultimate hour.

She plays Moira Strand, a defiant, queer handmaid who attempts to escape Gilead before ever being assigned to a home but is recaptured and forced to serve at a brothel. Stripped of all hope to ever again enjoy freedom, she finally regains strength after reuniting with June (Elisabeth Moss) and crosses into Canada at the end of the first season. In Little America, she resides with June’s husband Luke (O-T Fagbenle) as she grapples with the aftereffects of her deleterious time in Gilead. She and Luke are joined by Emily (Alexis Bledel) and June’s newborn, baby Nichole, who escape Gilead at the beginning of the third season, in the former of whom Moira finds a companion.

SEESamira Wiley (‘The Handmaid’s Tale’) on her 3rd consecutive Emmy nomination: ‘It never, ever, ever gets old!’ [EXCLUSIVE VIDEO INTERVIEW]

In “Sacrifice,” Luke and Moira visit the Waterfords, who are placed in a detention center after being charged with a number of crimes upon stepping foot on Canadian soil. While Luke faces Fred (Joseph Fiennes), Moira brings Nichole to Serena (Yvonne Strahovski) accompanied by a social worker and Mark Tuello (Sam Jaeger). Serena’s attempt at civility is met with Moira’s spurn as she instantaneously makes her unwavering loyalty to June explicit. She righteously puts Serena in her place by reminding her of her complicity in the rape of handmaids and recounting her own molestation at the brothel. As she exists, she drops the mic by poignantly concluding, “I may have sinned plenty, but you, YOU are the gender traitor.” In Gilead, the term is reserved for those who engage in same-sex activity, but Moira uses it to point out Serena’s conscious degrading of women.

Will the Lord open to Wiley a second time at the Emmys? Let’s consider the pros and cons.

Sheer abhorrence, scorn and fury effectively overtake Wiley’s face and body language as her character comes face to face with the woman who held down her best friend (June) while her husband raped her. The scene is forthwith stripped of any pretense as Moira curbs Serena’s attempt at establishing communicational normalcy, which Wiley channels through the sharpness and fleetness of her character’s retorts, imbuing all with a sense of derision. Writer Eric Tuchman sprinkles in a delicious “F— you” that Moira directs at Tuello after he prematurely tries to rein her in, delivered pitch-perfectly by Wiley. In her ensuing line reading of, “They treated me like sh—“ — “they” referring to the men at the brothel — you then discern the unshakable trauma she endured as a slave in Gilead. And while Moira’s aforementioned exiting line is certainly music to viewers’ ears, Wiley conveys it with gravitas as it serves to exemplify Gilead’s doctrine’s glaring hypocrisy.

With 17 acting nominations and six victories (for six different performers) thus far, “Handmaid’s” has established itself as an Emmy acting-branch favorite. When Wiley triumphed in the guest category in 2018, she overcame a vote-split with her two colleagues, Kelly Jenrette and Cherry Jones (who went on to win that award for the show in 2019). Thanks to her citation this year, she now joins Bledel – the 2017 guest champ, who is nominated in that category once more this year – as the only actor from the show to have been shortlisted for each of the show’s three seasons. In this year’s drama supporting actress race specifically, Wiley also beat six co-stars to the nomination, including 2017’s winner Ann Dowd and past nominee Strahovski. All aforementioned feats pulled off by her suggest overwhelming support for the actress, around whom all “Handmaid’s” votes can coalesce in her category, in which she needs just a bit over 12 per cent of the votes to be tipped over the edge.

While making a lasting impression, Wiley’s three minutes of screen time in her episode might not be enough to warrant a victory in a supporting acting category. All seven of her competitors – “Big Little Lies’” Laura Dern and Meryl Streep, “The Crown’s” Helena Bonham Carter, “Killing Eve’s” Fiona Shaw, “Ozark’s” Julia Garner (the defending champ), “Succession’s” Sarah Snook and “Westworld’s” Thandie Newton – have more screen time not only in their respective submissions but complete eligible seasons. Since Wiley’s material was scattered throughout seven episodes in the third season (in relatively small doses), she appeared in just one too many to submit as a guest actress.

Even though “Handmaid’s” returned to the Emmys with a decent 10 nominations, including Best Drama Series (which it won in 2017), it halved its total from the last time it was fully eligible in 2018. Most noticeably, it went from eight acting bids in ‘18 to just three this year, the third one being for Best Drama Guest Actor reigning champ Bradley Whitford, who successfully made the switch to drama supporting actor this year. “Succession” is the only one of Wiley’s rivals’ series to have more acting bids than “Handmaid’s” with nine mentions – “Killing Eve” and “Ozark” also have three, while “The Crown,” “Lies” and “Westworld” all have two – but the Hulu series missed out for a number of key players, including leading lady Moss, who snatched the drama actress statuette in 2017.