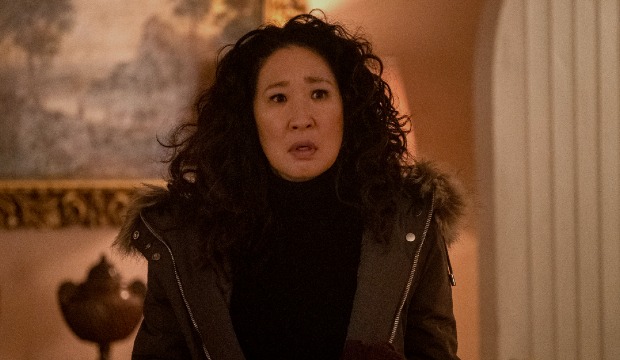 Sandra Oh has her third consecutive Best Drama Actress nomination for leading “Killing Eve” as the obsessed Eve Polastri. The season finale that she has submitted for Emmy judging is titled “Are You Leading or Am I?” The 42-minute installment was written by executive producer Suzanne Heathcote with Laura Neal and directed by executive producer Damon Thomas. It aired May 31, 2020 on BBC America as the eighth episode of the third season. An official log line reads, “Eve and Villanelle try to work out what the future may hold for them.”

Can Oh win this Emmy? Let us look at the pros and cons.

Amid renewed calls to support diverse artists, Oh stands out as the only east Asian actor nominated in a major Emmy category. The perennial Emmy bridesmaid contends now in a category in which the white front-runners are Emmy winner Jennifer Aniston (“The Morning Show”), Oscar winner Olivia Colman (“The Crown”) and four-time Emmy winner Laura Linney (“Ozark”).

A win for Oh need not be a handout, as her Emmy submission is the culmination of 23 episodes in the role. The actress layers her performance to reflect how Eve continues to reconcile with who she has become in her obsession with the psychopathic assassin known as Villanelle.

Eve’s first and last scenes with Villanelle in this finale find Eve verbalizing what Oh normally internalizes with her acting choices, which should help Emmy judges pinpoint what has been galvanizing about Oh’s performance, in addition to spelling out other reasons that they should be appreciative. “Are You Leading or Am I?” is also a showcase from both emotional and physical standpoints, with Eve respectively reeling from multiple deaths and hitting the dance floor.

Oh is yet to win an Emmy after 12 nominations, including her Best Drama Series bid for “Killing Eve” this year in her new role as executive producer. She was the front-runner to win Best Drama Actress all of last season, even with the arrival of co-star Jodie Comer threatening to split the vote. Oh ultimately lost not because of a vote-split, but because Comer overtook her. With a Comer-centered outing in the third season resulting in Oh missing a “Killing Eve” episode entirely for the first time, it seems more likely that Comer will repeat her victory if “Killing Eve” is to win Best Drama Actress again this year.

Oh went into last year’s Emmys having swept the equivalent awards from Critics’ Choice, the Golden Globes and the Screen Actors Guild, none of which nominated her this year. The media pushed the narrative that Oh was overdue for an Emmy, but have been quieter this time, with critics softening on “Killing Eve.” The bloom is off the rose for the Television Academy as well: The spy thriller fell out of the Best Drama Directing, Editing and Writing lineups this year.