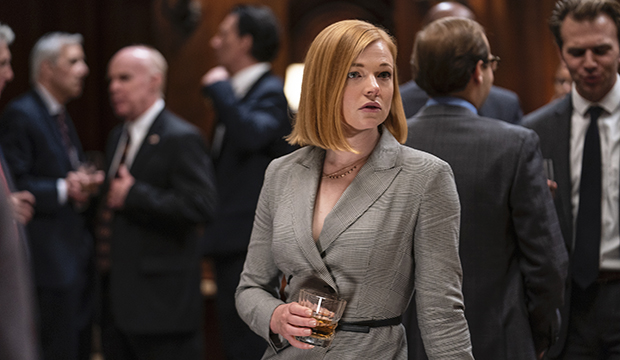 “This is real?” Sarah Snook’s Shiv Roy wonders with leery enthusiasm after her media magnate father Logan Roy (Brian Cox) offers to name her as his successor in “The Summer Palace,” the second-season premiere of HBO’s “Succession” that Snook submitted for Emmy Awards consideration. Snook earned her first-ever Emmy nomination in the Drama Supporting Actress category for her role as the liberal political strategist turned aspiring CEO of her father’s right-wing media conglomerate.

In “The Summer Palace,” Snook’s Shiv must cut her honeymoon with husband Tom (Matthew Macfadyen) short as the Roy family strategizes how to defend against the proxy battle that her brother Kendall (Jeremy Strong) forced on them. At the eponymous Hamptons house, Logan calls each of his children into his study to scrutinize their opinions on whether he should sell the company or fight the takeover. During her meeting, Shiv offers her strategic vision for the future of the firm, leveraging her political power over her father, and Logan extends to her the offer of a lifetime.

Will Snook’s thoroughly shrewd and enchantingly ruthless performance propel her to the first Emmy victory of her career? See the pros and cons of Snook’s submission below.

Snook submitted a strong episode to Emmy voters, a choice no doubt inspired by her extended scene opposite Cox in which the two spar and scheme their way to an agreement. Snook has a few earlier standout moments, including a bitter, wounded confrontation with Kendall, but nothing compares to her negotiation with Logan. The six-minute scene is masterfully choreographed and performed with the power dynamics constantly shifting between the two characters, and Snook plays Shiv’s myriad thoughts and maneuvers masterfully. She proceeds from cuttingly honest and confrontational to seemingly modest and defiant to, finally, the relief, joy, pride, and disbelief of victory when Logan finally offers her what she never before acknowledged she wanted. Snook delivers a true tour-de-force.

Unlike almost every one of her “Succession” co-stars — with the exception of Drama Guest Actor nominee James Cromwell — Snook is not competing against a cast mate in her category. With no possibility of splitting the vote of “Succession” supporters, and with love of the show within the actor’s branch on full display with its impressive nine acting nominations, Snook has a very clear path to victory on Emmy night.

The nine acting bids the show earned for its second season follow an across-the-board acting snub last year, which suggests that the branch just recently caught up with the series. If voters have both seasons on their minds when they cast their ballots, Snook will have a significant advantage over her competitors, as they’ll consider Shiv’s full character arc and the evolution of Snook’s performance over the two years. And if voters watch the submissions in every acting categories, they’ll see Snook in five additional episodes in which she consistently delivers impressive work.

WATCH our exclusive interview with Mark Mylod, director of “The Summer Palace”

Although “The Summer Palace” features one of Snook’s best scenes of the season, the episode feels like a true ensemble piece. Voters who love “Succession” will know of Snook’s strong work throughout the season — during which she felt almost as much a lead as Cox and Strong — but if they cast their ballot solely on her submitted episode they might think the installment lacks enough material to award it with the trophy.