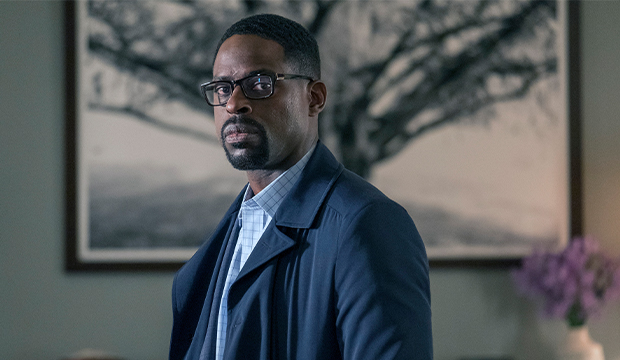 Sterling K. Brown continues to rack up nomination after nomination for “This Is Us.” Emmy voters just gave him his fourth bid in a row in Best Drama Actor for playing Randall Pearson in the NBC drama. The actor won this category for the first season in 2017, overcoming a potential vote split with his TV dad, Milo Ventimiglia. This year, Brown is submitting the penultimate Season 4 episode “After the Fire” for Emmy consideration.

In this installment, Randall is in therapy imagining what his life would have been like if his father survived the deadly fire, believing every problem would be magically fixed. His therapist (Pamela Adlon) finds this all a little too rosy and challenges him to imagine the worst-case scenario, which gives us a version of Randall’s life in which his birth father (Ron Cephas Jones) rejects him, he distances himself from his family and he becomes a teacher. She then helps him understand that his issue isn’t with his dad so much as his resentments toward his adoptive mother, Rebecca (Mandy Moore), for keeping his birth father away from him for so long. Having already lost three parents and fearing he might lose a fourth, he calls Rebecca and convinces her to get treated for her fading memory by doing a clinical trial.

SEE Sterling K. Brown Interview: ‘This Is Us’ and ‘The Marvelous Mrs. Maisel’

Can Brown win with this submission? Let’s take a look at the pros and cons.

Over the course of five years, Brown has accumulated an astonishing seven Emmy nominations, winning two (his first was in Best Movie/Mini Supporting Actor for “American Crime Story: The People v O.J. Simpson”). There is no doubt that voters love him, considering he also snuck into Best Comedy Supporting Actor this year for his small role on “The Marvelous Mrs. Maisel.” The TV academy simply can’t get enough and he may get a boost here based on sheer popularity.

If voters are watching the submissions, “After the Fire” should stand out as one of the most impactful episodes in the field. Brown gets to play three distinct versions of Randall: the idealized version, the more hardened cynic and the one we’ve all come to know and love. He presents each incarnation differently, allowing the audience to see his full range as an actor. Voters may even sympathize with what Randall is going here, dealing with parental baggage and having a personal breakthrough.

“This Is Us” dropped out of Best Drama Series for this first time this year, signaling that voters are starting to move on. The TV academy does not typically reward performances in shows they are starting to lose interest in, and it has been three years since Brown’s last win. While he still has enough passion to get nominations, some may feel he has already been taken care of, freeing them up to look at some of the fresher faces in this category.

While “This Is Us” continues to be a highly-rated show with critics and audiences, it may simply be too competitive for Brown this year. The other nominees are last year’s winner, Billy Porter from “Pose”; Brian Cox and Jeremy Strong from the red-hot “Succession”; Jason Bateman in the similarly popular “Ozark” and the Emmy-less Steve Carell for “The Morning Show.” The narratives are stronger for most of the other nominees in this category.