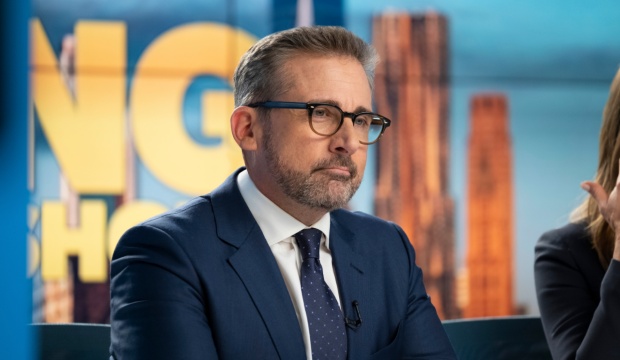 Steve Carell has his first Emmy nomination in nine years for playing disgraced breakfast television host Mitch Kessler on “The Morning Show.” He has submitted the flashback episode for academy consideration to support his Best Drama Actor bid. Titled “Lonely at the Top,” the 61-minute installment was written by supervising producer JC Lee and directed by Michelle MacLaren. This eighth episode from the first season premiered December 6, 2019 on Apple TV+. Its official log line reads, “TMS celebrates the birthday of one of their own as the country struggles with a tragic event.”

Can Carell win his first Emmy with this submission? Let’s take a look at the pros and cons.

Carell has 10 previous Emmy nominations for “The Office” in the comedy field. That he never won for his iconic performance as Michael Scott is considered an all-time injustice. He’s spent most of the last decade in film, earning an Oscar nomination for 2014’s “Foxcatcher” and several other citations for 2015’s “The Big Short” and 2017’s “Battle of the Sexes.” Carell returned to television in a big way this past season with both “The Morning Show” and the comedy “Space Force,” which has four below-the-line Emmy nominations. Voters now have a chance to compensate for overlooking him for his signature role — and they better act fast, as he is not expected to return to this show in a leading role.

Despite the Best Actor nomination from the Oscars for dramatic work, Carell is still known primarily as a funnyman, so he could follow the likes of Bryan Cranston (“Breaking Bad”) and John Lithgow (“The Crown”), who achieved fame with sitcom roles before returning to television in dramas that earned them Emmys.

It is not just the genre that is a departure; Carell is is doubling down on playing against type with such a despicable character. The bravery of the performance is on full display in his submitted episode, which is set nine months before the main narrative of the series. “Lonely at the Top” emphasizes Carell’s Mitch by excluding co-lead Reese Witherspoon and Best Drama Supporting Actor front-runner Billy Crudup. He exhibits his charming public persona in early scenes as he celebrates his 50th birthday, but his slimy side comes out behind closed doors when he sexually assaults an underling. This bridges the gap between the long-loved television personality that Mitch was before the pilot episode and the #MeToo pariah the actor portrays throughout the rest of the season. Carell is obviously believable in the former position, so the transformation expresses his range.

This is a divisive performance, so Carell might need a divided field in order to achieve a plurality. He might have this, with “Succession” fielding both Golden Globe-winning Brian Cox and Critics’ Choice Jeremy Strong, but that show might be far enough ahead of “The Morning Show” to overcome vote-splitting. “Succession” is the front-runner to win Best Drama Series, for which “The Morning Show” was not even nominated, even with an eighth slot for the first time. Emmys have seldom gone to dramas that were snubbed in the series category lately, especially in a field as high-profile as Best Drama Actor.

Although television fans consider Carell overdue for an Emmy, it is dubious whether the industry shares that sentiment. He won three Gold Derby Awards for starring in “The Office,” but he was never awarded individually by the Screen Actors Guild. He lost repeatedly with them to Alec Baldwin (“30 Rock”), who was on a historic seven-year streak.

Although borderline-supporting performances from Billy Porter (“Pose”) and Sterling K. Brown (“This is Us”) have won this leading award in recent years, it does not exactly help that Mitch is not as central a role as the ones that have traditionally won Best Drama Actor. Carell misses two of the first season’s 10 episodes entirely and even campaigned as a supporting actor for the winter awards, being snubbed by both the Globes and Critics’ Choice Awards. (The Screen Actors Guild nominated him in their combined lead/supporting category, which likely inspired him to make the jump for the Emmys.)