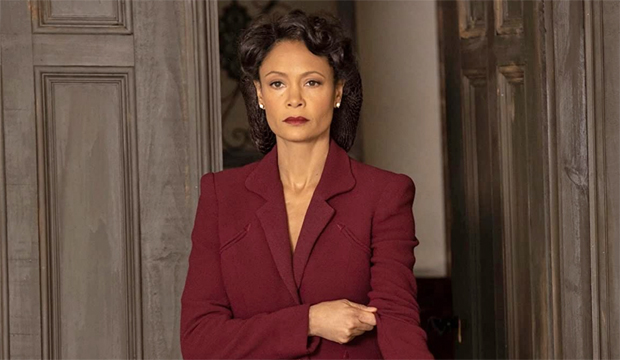 Thandie Newton has long been a fan favorite of “Westworld” viewers thanks to her fascinating performance as renegade host Maeve Millay in the HBO series. She parlayed the excitement around her character into an Emmy win for Season 2. The actress is nominated once again in the Drama Supporting Actress category this year. She submitted the Season 3 episode “The Winter Line” for Emmy consideration.

In this episode, Maeve awakens inside WarWorld, a park set in Nazi occupied territory of World War II. She is quickly reunited with Hector (Rodrigo Santoro) who helps her escape Nazi guards, but she realizes that her love is simply playing out a park narrative having forgotten their past together.

SEE ‘Westworld’ Season 4 theories: What happens next for our favorite hosts and humans?

Maeve kills herself and wakes up in the underground operations center where she encounters Lee Sizemore (Simon Quarterman). Lee reveals that he placed Maeve in WarWorld because it’s close to The Forge, the facility where all host data (including Maeve’s daughter) is stored. The pair head to this facility, but Meave is baffled when Lee makes a romantic plea and kisses her. This uncharacteristic move signals that Lee, and the entire world she’s inhabiting, is merely a simulation. She is able to cripple the simulated world by breaking its code, then hacks into a maintenance drone in the real world to steal her “pearl” which removed her from WarWorld. Maeve wakes up in the home of Engerraund Serac (Vincent Cassel), who forces Maeve to help him in his quest to kill Dolores (Evan Rachel Wood).

The massive amount of screen time Newton receives in this episode makes it feel like she’s the star of her own movie. This makes for a great Emmy submission as the actress has the chance to showcase plenty of layers to her character. In particular, the multiple goodbyes she has to endure with her former lover Hector (the guy just can’t stop getting shot) are played with a guttural emotional quality. The heartache helps to break up the action packed episode and should be catnip to voters.

Newton plays everything with a cool confidence that helps ease potential confusion around some of the more heady topics introduced. For instance, understanding every detail of how her math equation breaks the simulation doesn’t matter much when every line is delivered like a badass. She feels a bit like James Bond during parts of this episode with an infinitely watchable performance.

Maeve’s story largely stands on its own this episode, but voters who don’t regularly watch “Westworld” may be confused by the secondary storyline with Bernard (Jeffrey Wright). He also explores the underground labs of the park, delivers a lot of technology mumbo jumbo, and even discovers a discarded Maeve body with it’s pearl missing. A viewer who doesn’t know a host from a human might be overwhelmed with the science fiction concepts baked into this story.

Even though Maeve dominates the episode, it seems like she is missing one more key emotional scene toward the episode’s end. Her final moment with Serac is captivating and gives Newton the chance to deliver some sassy zingers. But it doesn’t have the deep emotional quality she showcases earlier in Hector’s death scenes.