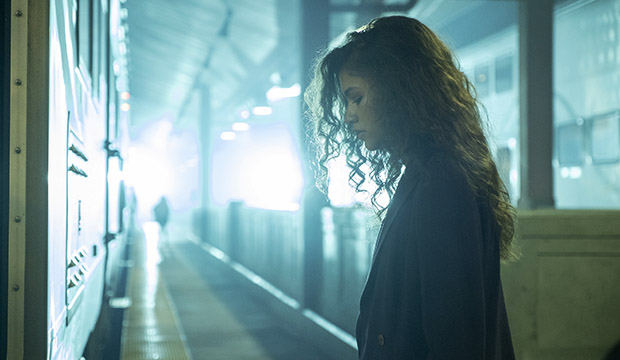 When Jodie Comer won the Emmy for Best Drama Actress last year for “Killing Eve” she became the youngest winner ever in the category at the age of 26. This year she contends again, but against a 24-year-old Zendaya who, with a career-catapulting performance in HBO’s new series “Euphoria,” could beat that record. The young actress first made a name for herself 10 years ago on Disney’s “Shake It Up,” and has since elevated her fame to movie star status with roles in the new “Spider-Man” franchise, musical “The Greatest Showman” and upcoming sci-fi epic “Dune.”

In her nominated episode “Made You Look,” Zendaya’s Rue Bennett reaches her 60-day mark in Narcotics Anonymous at the same time as her new best friend Jules begins a texting love affair with a dangerous boy in their class. The closer Jules grows to her new crush, the more jealousy starts to creep in for Rue who eventually declares her love for Jules through a kiss and then runs out. From there Rue goes to her friend and dealer Fez for a fix, but is turned away, culminating in the heartbreaking breakdown of a teenage addict pounding on a dealer’s door begging for them to feed their need.

With her star on the rise, can Zendaya cement a legacy for actresses in their 20s as annual threats in the Drama Lead Actress category? Let’s look at the pros and cons.

Zendaya’s tour-de-force performance in “Euphoria” is unlike anything else an actress of her generation has achieved on television. The scene of her pounding on the door is a memorable one from the series and yet is somehow only the beginning of what becomes a layered and emotionally gripping performance throughout the season.

HBO hasn’t produced a winner in this category since 2003 when Edie Falco won for the third time as Carmela in “The Sopranos.” In fact, Falco is HBO’s only winner in this field despite its resurgence with recent nominations for Evan Rachel Wood (“Westworld”) and Emilia Clarke (“Game of Thrones”).

The category is stacked with actresses who have a long list of previous Emmy nominations, and some of them still don’t have a statue to show for it. Olivia Colman (“The Crown”) is nominated for the third time in the evolution of a role Claire Foy won for just two years ago and Sandra Oh (“Killing Eve”) is on her ninth Emmy nomination for acting since her first only 15 years ago. Laura Linney (“Ozark”) has won four times from six nominations, Jennifer Aniston (“The Morning Show”) won once in her “Friends” role with six previous nominations, and Comer is the reigning champ.