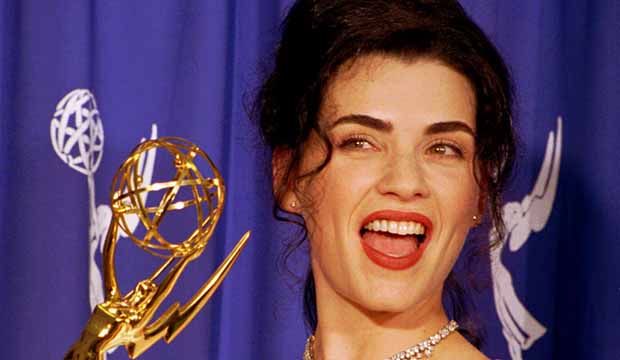 “Frasier.” “Friends.” “ER.” “The X-Files.” It’s amazing how just the mention of a TV show can take you back in time, and with this list it’s no surprise that we’re offering our flashback 25 years to 1995, remembering the 47th Emmy Awards. It was a night with no one big winner among several now-classic series, a new EGOT recipient, some sentimental moments and a memorable homage to TV theme songs. Jason Alexander of “Seinfeld” and Cybill Shepherd of “Cybill” led the festivities on September 10.

Perennial favorite “Frasier” held on to its title of Best Comedy Series for the second year, a streak it would continue until 1999, winning for each of its first five seasons. It beat out popular sitcoms “The Larry Sanders Show,” “Mad About You,” “Seinfeld” and newcomer “Friends.” Kelsey Grammer won his second of four Best Comedy Actor Emmys for playing the title character, while his onscreen brother, played by David Hyde Pierce, won his first of four in the supporting category. The Supporting Actress winner was also a first-timer, as Christine Baranski won her first and only trophy for her work on “Cybill,” although she has received 13 more nominations for various series through the years. The Best Comedy Actress winner, however, was the won to beat for several years, and concluded her reign at this ceremony.

Candice Bergen won her fifth Emmy in seven years for her work on the groundbreaking series “Murphy Brown,” making her the third performer to win five Emmys for playing the same character. This would be her final win for “Murphy,” as Bergen declined to submit herself for consideration during the show’s final three seasons, as she felt she had been won enough for that show. This remains Bergen’s last Emmy to date, although she did receive two nominations for her work on “Boston Legal.”

Not only was it a year for stellar comedies, but there was also stiff competition on the drama side. “NYPD Blue” won its only award for Best Drama Series after a stunning loss the previous year. It was for the second season, beating out “Chicago Hope,” “Law and Order,” “The X-Files” and newcomer “ER,” which garnered 15 nominations but few wins (it was the overwhelming favorite in several). This situation mirrored the year before, when “NYPD Blue” received 19 major nominations in its freshman season, but lost the big prize. Oddly enough, the next year, “ER” would win its one and only trophy for Best Drama for its second season.

Despite six acting nominations, the only performer from “ER” who took a statue home that night was Julianna Margulies for Best Drama Supporting Actress. Mandy Patinkin took home the prize for Best Drama Actor for “Chicago Hope,” which was his first of seven nominations and his only win to date. “Picket Fences” snagged two acting trophies, with wins for Kathy Baker as Best Drama Actress and Ray Walston for Best Drama Supporting Actor. Octogenarian and veteran actor Walston declared, “I have 30 seconds to tell you I have been waiting 60 years to get on this stage.” Both Baker and Walston would repeat their wins the next year.

One big winner of the evening was “Barbra: The Concert,” which was named Best Variety, Music or Comedy Special. Barbra Streisand also won for her performance, and her longtime collaborator Marvin Hamlisch accomplished a rare feat. The acclaimed composer won his first two of four Emmys that night, becoming the sixth EGOT recipient (there are now 16). Furthermore, in addition to his Emmy, Grammy, Oscar and Tony Awards, he had also won a Pulitzer Prize, giving him the extremely rare PEGOT status.

One actress got halfway to an EGOT that evening. Glenn Close won her first of three Emmys to add to her three Tonys, this time for Best Movie/Mini Actress for her role in “Serving in Silence: The Margarethe Cammermeyer Story.” Almost a year after his death, Raul Julia won the Best Actor prize in that category for HBO’s “The Burning Season.”

Another highlight of the evening had Alexander showing off his various talents with a six-minute mash-up of some of the all-time greatest theme songs, including “Green Acres,” “All In the Family,” “The Jeffersons” and “Gilligan’s Island.” He finished with a blend of two of the best, seamlessly weaving lyrics from “The Mary Tyler Moore Show” and “Cheers.”