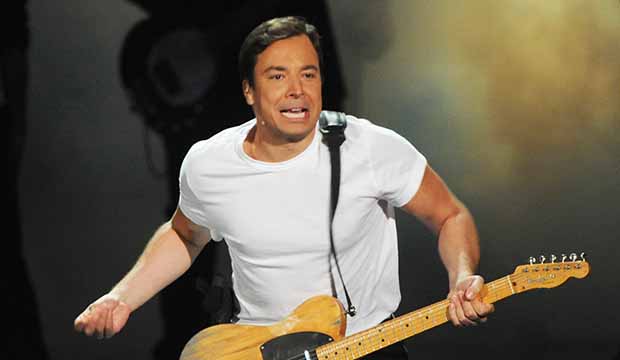 It was one of the most entertaining and memorable Emmy Awards ceremonies of this century, with an energetic opening, a perennial favorite setting a record, several first-time winners and a favorite drama continuing its reign. Jimmy Fallon hosted the event on August 29, 2010, for his first (and only) time and led one of the best openings in Emmy history. Let’s flashback 10 years ago to that event on NBC.

Fallon began the night with a pre-taped bit in which he ran into cast members from “Glee,” who were despondent that they couldn’t afford to go to the awards show. But – lo and behold! – there’s a singing contest with enough prize money to get them tickets; however, they need a few more people to be eligible to participate. What follows is a hodgepodge mix of celebrities who enter into the fray – Tina Fey can’t “sing and dance as good as they can” but is happy to help, Jon Hamm is practicing dirty dancing moves with Betty White and joins the procession, Jane Lynch is ready to make an impression in her track suit. Even Kate Gosselin pokes fun at herself by offering to join in, but they politely decline. Jorge Garcia (“Lost”), Joel McHale (“Community”) and Nina Dobrev (“Vampire Diaries”) round out the thrown-together group and they seamlessly segue live onto the Emmy stage to the tune of Bruce Springsteen‘s “Born to Run.” “Glee” was still relatively new and at the height of its popularity; to this day, it’s a fun watch, if a bit bittersweet since the passing of Cory Monteith.

Not only did the then 88-year-old White have a little fun with Hamm before the ceremony, but she proved that you’re never too old for a little flirting as the two presented together while exchanging innuendos. Besides getting to “ham” it up that evening, White had also won for Comedy Guest Actress (“Saturday Night Live”), making her the oldest performer to win an Emmy up to that time. With her multiple wins in the supporting category, it was fitting that she presented the award for Best Comedy Supporting Actor – and it went to a fresh face.

Eric Stonestreet took his first of two Emmys for his portrayal of Cameron Tucker in “Modern Family,” which also won Best Comedy Series for its freshman season, a title it would hold on to for five consecutive years. The rest of the comedy awards were spread over several series, and all were first-time winners. Jim Parsons won his first of three Emmys for Best Comedy Actor for his role as Dr. Sheldon Cooper on “The Big Bang Theory” and Jane Lynch won for Best Comedy Supporting Actress for her role as Sue Sylvester on “Glee.” Even though Edie Falco was already a three-time winner for Drama Actress, she won her first and only statuette for Comedy Actress for her role as “Nurse Jackie.”

Although newer comedies were honored, on the drama side “Mad Men” continued its reign as Best Drama with its third of four consecutive wins, and Bryan Cranston was also honored with his third consecutive win, for Best Drama Actor for his role as Walter White in “Breaking Bad.” However, the rest of the drama winners were first-timers. On her fifth nomination, Kyra Sedgwick was finally recognized for her work on “The Closer,” earning the Best Actress award. In the supporting categories, Aaron Paul nabbed his first of two wins for Drama Supporting Actor, and Archie Panjabi won her first and only Drama Supporting Actress for “The Good Wife.”

Other memorable moments included Julianna Margulies presenting the Bob Hope Humanitarian Award to former “ER” costar George Clooney, who recalled spending time with Bob Hope and Dolores Hope, and being inspired by them. Clooney also appeared in a funny skit with several “Modern Family” characters as a new “love interest” for them.

For his work in “You Don’t Know Jack,” Al Pacino won for his miniseries as the controversial euthanasia advocate Dr. Jack Kevorkian. During his rambling speech, he asked Kevorkian to stand to be recognized, which provided a rather odd and awkward moment to an otherwise lighthearted evening. However, there were more laughs than not, with Fallon as the host. In addition to the opening “Glee” number and numerous quips throughout the evening, he paid homage to popular departing shows by performing as popular musicians. He played piano as Elton John to say goodbye to “24,” dressed up as Boys II Men for a “Law and Order” tribute and finished as Bille Armstrong from Green Day to honor “Lost.” It was an all around entertaining evening, and a prime example of how to run a successful awards show.