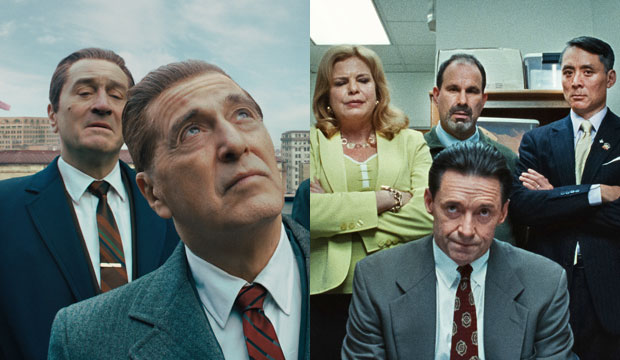 In what has been a growing trend in recent years at the Emmys, this year’s crop of TV movies under-performed in the nominations. I thought films like “Bad Education” and “El Camino: A Breaking Bad Movie” would have done a lot better than they did given their strong reviews and the high-profile talent attached. This is especially ironic during an era when streaming movies are getting more and more popular at the Oscars. So what gives?

“Bad Education” earned only two Emmy noms: Best TV Movie and Best Movie/Limited Actor (Hugh Jackman); Emmy darling Allison Janney didn’t even earn a nomination for her supporting performance as a corrupt school official. “El Camino” did a little better with five nominations including Best TV Movie, but none of its actors made the cut, not even Aaron Paul, who previously won three Emmys for playing the same role in the “Breaking Bad” series.

Then there’s “Unbreakable Kimmy Schmidt: Kimmy vs. the Reverend,” which earned noms for Best TV Movie and Best Movie/Limited Supporting Actor (Tituss Burgess), but nothing else. The interactive special didn’t even earn a nomination in the category specifically designed for interactive programs. And Jackman and Burgess are the only acting nominees for TV movies; the rest of the field in long form categories is filled by performers in limited series.

It hasn’t always been this way. In fact, it’s a fairly recent phenomenon. It wasn’t long ago that telefilms would rack up as many or more nominations and wins than their limited series counterparts. Just 10 years ago “Temple Grandin” swept the top categories including victories for directing and in three out of the four acting categories. The following year the Emmys consolidated movies and limited series not because of the dearth of movies, but because of the dearth of limited series. And over those three years movies won twice: “Game Change” in 2012 and “Behind the Candelabra” in 2013.

But as limited series and anthologies started growing in popularity, telefilms became increasingly marginalized, especially in the last five years. The Lyndon Johnson biopic “All the Way” was shut out of its eight nominations in 2016. The following year the Bernie Madoff docudrama “The Wizard of Lies,” starring Robert De Niro in a rare TV appearance, was only nominated four times and lost all of them. That same year “The Immortal Life of Henrietta Lacks” was only nominated for Best TV Movie; star Oprah Winfrey wasn’t even nominated for her lead performance.

SEEOscar winners who could take home Emmys in 2020 include Cate Blanchett, Olivia Colman …

And so on from there. In 2018 Al Pacino couldn’t even get a nomination for playing the title character in “Paterno,” and the critically lauded “The Tale” starring Laura Dern earned no other nominations besides Dern and the top prize. And in 2019 there wasn’t a single telefilm nominated for writing or directing, not even “Deadwood,” which was the continuation of a series that had won best Drama Directing in 2004.

This year there are again no TV movies nominated for writing or directing. If they had been released theatrically, I think they might have actually done better at the Oscars, where streaming movies have actually been getting a leg up. Consider that Netflix’s “Roma” (2018) and “The Irishman” (2019) received 10 Oscar nominations each, while this year’s five Emmy nominees for Best TV Movie earned 11 nominations combined.

SEE2020 Emmys diversity: Record number of Black actors is just as interesting for who WASN’T nominated

TV industry trends are cyclical, though. This time a decade ago limited series were more or less an afterthought; so few of them aired in 2009 and 2010 that there were only two nominees for the top award in both years. Then Ryan Murphy‘s “American Horror Story” anthology helped launch a wave of long form programs with big-name stars and filmmakers attached.

This time a decade from now perhaps TV movies will boom again, especially after the COVID-19 pandemic is done turning the entertainment industry upside down; TV and streaming services are where most people are watching their movies right now anyway. It may only be a matter of time before they make an awards comeback on the small screen.