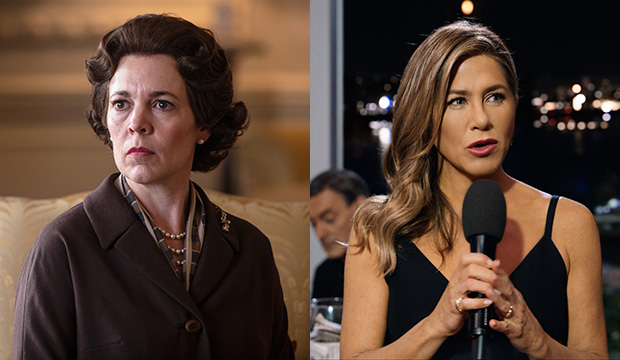 The Best Drama Actress Emmy field is stacked with contenders, but at the moment, this appears to be a two-women race. “The Crown’s” Olivia Colman and “The Morning Show’s” Jennifer Aniston occupy the top two spots in our early odds and are the only ones with votes from our pundits to take home the gold.

Colman currently is ahead at 7/2 odds, with eight Experts and eight Editors in her corner. Aniston has two Experts and three Editors backing her for 4/1 odds.

It’s certainly not brand new information that these two are the favorites, as they each picked up hardware during the winter awards. Defying our odds and common logic, Colman nabbed the Golden Globe instead of A-lister-on-a-new-show Aniston, while Aniston returned the favor at the Screen Actors Guild Awards, where “The Morning Show” was snubbed in ensemble, which was ultimately won by the cast of “The Crown.” So if you count that win, Colman has the edge with two statuettes to Aniston’s one. (The Critics’ Choice Awards, which didn’t nominate Aniston, anointed “Watchmen” star and three-time Emmy champ Regina King, who is now competing in limited.)

Given this “opposite day” trend, maybe it’ll actually be Aniston who triumphs in September. While “The Crown” is the stronger and better reviewed show — it’s in second in our drama series odds, behind “Succession,” compared to seventh place for the Apple TV+ series — with Emmy-winning history, including for Colman’s predecessor Claire Foy in 2018, viewers have responded fervently to “The Morning Show,” which boasts the type of showy performances that have traditionally garnered Emmys. As Alex Levy, a middle-aged anchor whose world gets turned upside down after her co-anchor is accused of sexual assault, Aniston has a handful of fiery speeches throughout the season that also serve to remind everyone that she’s not just a gifted comedic actress. Colman, of course, delivered as Queen Elizabeth II, but it’s a far more subdued performance.

Or maybe it won’t be either of them at all. Though Colman is an Oscar winner, she is actually the only non-Emmy winner in our current predicted top six, with an 0-2 record. Aniston won for “Friends” in 2002 in comedy actress. Defending drama actress champ Jodie Comer is in third place, and the third season of “Killing Eve” doesn’t premiere until April 26. 2017 champ Elisabeth Moss (“The Handmaid’s Tale”) is in fourth place, followed by another 2017 winner — on the limited side — Nicole Kidman for “Big Little Lies.” Both of their shows, however, aired last summer.

And in sixth place is someone who owns as many acting Emmys as the other five combined: “Ozark’s” Laura Linney, who has a 4-2 record. She arguably ought to be higher — and she will likely rise in the coming weeks — since Season 3 is premiering at the perfect time (Friday) as we self-quarantine and has gotten decent reviews so far. Not to mention, “Ozark” has been a proven industry favorite the past few years and bagged two big Emmys last year for supporting player Julia Garner and director Jason Bateman in the upset of the night.