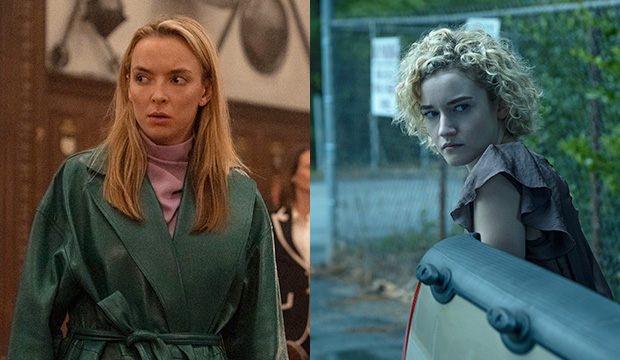 Of the eight regular acting categories at the Emmys, we’ll get new winners in three of them in September, as comedy lead champs Bill Hader (“Barry”) and Phoebe Waller-Bridge (“Fleabag”), and drama supporting actor winner Peter Dinklage (“Game of Thrones”) are all out of the running (or specifically in the latter two cases, gone for good). So which of the remaining five categories is most likely to see a repeat champ?

Dinklage notwithstanding, the drama categories went to first-time nominees last year: Billy Porter (Best Drama Actor, “Pose”) and Jodie Comer (Best Drama Actress, “Killing Eve”) and Julia Garner (Best Drama Supporting Actress, “Ozark”). Porter, the first openly gay black man to win drama actor, was predicted to prevail, but he might have a tougher time getting to the stage this year if our odds are correct. Currently in fifth place, he trails Golden Globe champ Brian Cox (“Succession”), Jason Bateman (“Ozark”), Bob Odenkirk (“Better Call Saul”) and Jeremy Strong (“Succession”); Sterling K. Brown (“This Is Us”) is in sixth. What’s more, “Pose,” which received a drama series bid last year, is in 10th place at the moment in a far more crowded field this year with the return of “The Handmaid’s Tale,” “Westworld,” “Stranger Things” and “Big Little Lies,” on top of new contenders like “The Morning Show.” And then there’s that weird drama actor trend of first-year or final-year shows winning, but to be fair, none of the top six fit that mold.

Garner is the best positioned of the drama trio, in second place behind “The Crown’s” Helena Bonham Carter. “Ozark” has always been an industry favorite — it also shockingly won directing last year for Jason Bateman — but it’s expected to do even better this time around with its well-received third season, in which Garner continues to be a scene-stealer. But she may have some company from co-star Janet McTeer, who’s in sixth place and could cause a vote-split. “Big Little Lies'” Meryl Streep and Laura Dern are in third and fourth, respectively, and former champ Thandie Newton (“Westworld”) is in fifth.

But it’s in the comedy supporting races where it looks like those repeats will probably occur. “The Marvelous Mrs. Maisel’s” Alex Borstein and Tony Shalhoub are both in first place in their respective races. Aiming for a three-peat, Borstein is ahead of Kate McKinnon (“Saturday Night Live”), co-star Jane Lynch, Annie Murphy (“Schitt’s Creek”), co-star Marin Hinkle and Betty Gilpin (“GLOW”). Hinkle was nominated last year and Lynch won in guest, so can Borstein take down two co-stars this time?

Shalhoub is going for his second straight win and leads Dan Levy (“Schitt’s Creek”), Alan Arkin (“The Kominsky Method”), Brown (“The Marvelous Mrs. Maisel”), Kenan Thompson (“Saturday Night Live”) and Louie Anderson (“Baskets”). He also has his second consecutive SAG Award win under his belt, and while Borstein did not take home an individual SAG, she still made the single lineup as a supporting player, and “Maisel” upset “Fleabag” in comedy ensemble to even Borstein’s shock.