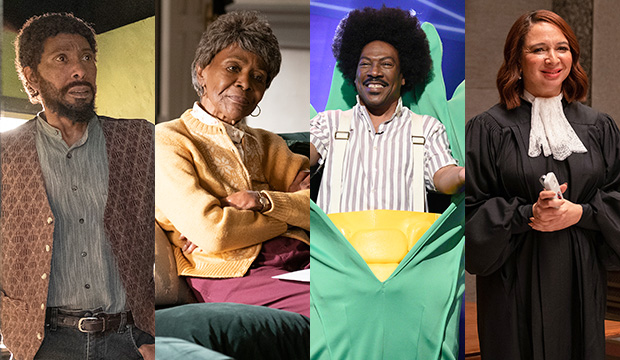 Two years ago, Ron Cephas Jones was part of Emmy history when the four guest acting categories went to Black actors for the first time. And he could enter the record books again as our odds are forecasting a second guest sweep by Black performers.

Jones is predicted to win Best Drama Guest Actor again for “This Is Us,” the same show for which he prevailed in 2018. Cicely Tyson is the favorite in Best Drama Guest Actress as she seeks her fifth bid for “How to Get Away with Murder.” On the comedy side, Eddie Murphy (“Saturday Night Live”) and Maya Rudolph (“The Good Place”) are out in front.

The guest categories have all crowned multiple Black winners before, but never all in the same year until 2018. (Drama supporting actor is the only long-running acting category left without a Black champ.)

This year’s quartet of frontrunners all have something going for them. It’s the last chance to award Tyson and Rudolph for their respective shows, which ended last season. Tyson is a 95-year-old legend who’d become the second oldest Emmy winner after Norman Lear, who was 97 when he triumphed for the variety special “Live in Front of a Studio Audience: Norman Lear’s ‘All In the Family’ and ‘The Jeffersons'” last year. And while “The Good Place” has never been an Emmy favorite, Rudolph has been the only non-Ted Danson acting nominee the past two years.

Like his fellow “SNL” alum Rudolph, Murphy has never won an Emmy in any capacity for the sketch series. His hosting gig in December — his first return in 35 years — was an Event, during which he resurrected some of his classic characters, including Buckwheat, Gumby and Mister Robinson, and scored the biggest ratings for “SNL” in nearly three years. As for Jones, well, we all know how much the acting branch loves “This Is Us,” which gave him loads of screen time in his submission, “After the Fire,” a “Sliding Doors”-esque episode. Jones, who’s never been snubbed for the show, would be the first person to win that category twice for the same role.

But they all also have some fierce competition. “The Handmaid’s Tale” has never lost a drama actress race and fields, among others, 2017 champ Alexis Bledel, who’s in second place. Phylicia Rashad (“This Is Us”), reigning champ Cherry Jones (“Succession” — though she’s also on the ballot for “Handmaids,” for which she won), Pamela Adlon (“This Is Us”) and Jane Lapotaire (“The Crown”) round out the top six.

Last year, “Maisel” swept the comedy guest races and defending champ Luke Kirby is in the running again, chilling in second place. John Mulaney (“SNL”) is in third, followed by Jon Hamm (“Curb Your Enthusiasm”), the late Fred Willard (“Space Force”) and Zachary Levi (“Maisel”). Jane Lynch, who won guest actress for “Maisel” last year, is in supporting now, but the Amazon series has Wanda Sykes, who’s currently in third, behind No. 2 Phoebe Waller-Bridge (“SNL”). “The Politician’s” Judith Light and Bette Midler, and Lisa Kudrow (“The Good Place”) are in Nos. 4-6.

Meanwhile, Andrew Scott is hot on Jones’ tail after Netflix confirmed that the “Fleabag” alum would be “Black Mirror’s” only submission in drama guest actor. Charles Dance (“The Crown”), Jason Bateman (“The Outsider”), James Cromwell (“Succession”) and 2017 champ Gerald McRaney (“This Is Us”) make up the rest of the predicted nominees.