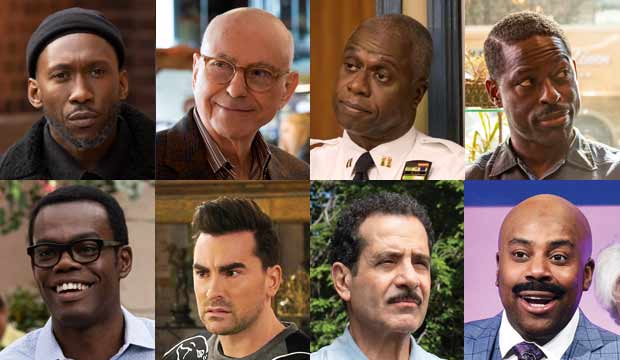 This year’s Comedy Supporting Actor lineup at the Emmys includes last year’s reigning champ, veteran performers searching for their first win, and a first-time nominee. We have watched every episode submission from these actors to weigh the pros and cons of their selections. Who will take home the gold on Sunday, September 20? Follow the links below to each episode analysis and make your final Emmy predictions!

Mahershala Ali is a four-time Emmy nominee. He was previously nominated in Drama Guest Actor for “House of Cards” and Limited/Movie Actor for “True Detective.” Ali has an additional nomination this year in Outstanding Children’s Program for “We Are the Dream: The Kids of the Oakland MLK Oratorical Fest.” The actor has submitted the episode “Little Omar” for consideration: the Sheikh and Ramy are praying for Nico. Later they go to visit him in the hospital room, where they ask to pray by his bedside since he is brain-dead. The duo then visits Dennis in prison, and he spills several secrets. After looking for the dog Boomer for Dennis’ sake, the Sheikh wonders if his teaching relationship with Ramy is not wise.

This is Alan Arkin’s sixth Emmy nomination. He competed for “The Kominsky Method” last year and has additional nominations for “ABC Stage 67,” “Escape from Sobibor,” “Chicago Hope,” and “The Pentagon Papers.” Arkin has submitted the episode “A Secret Leaks, A Teacher Speaks” for consideration: Norman goes with Sandy to start treatments. He encourages Sandy to tell Mindy about his condition. Madelyn tells more about her life to Norman and then he takes her to see Phoebe.

This is Andre Braugher’s eleventh Emmy nomination. He has previous nominations for “The Tuskegee Airmen,” “Homicide: Life on the Street (1996 & 1998),” “Gideon’s Crossing,” “Thief,” “Men of a Certain Age (2010 & 2011),” and “Brooklyn Nine-Nine (2014-2016).” He won two Emmys, for “Homicide: Life on the Streets” and “Thief.” This year, he has submitted the episode “Ransom” for consideration: Holt and Kevin have a meltdown over the abduction of Cheddar. The usually reserved Holt acts more frantic like Peralta instead of his typical self because of the dognapping.

Sterling K. Brown is a seven-time Emmy nominee. He is also nominated this year in Drama Lead Actor for “This is Us,” which is his third nomination for that program. Brown has previous nominations for “American Crime Story” and “Brooklyn Nine-Nine.” He won his bids for “American Crime Story’ and Season 1 of “This is Us.” The actor has submitted the episode “Panty Pose” for consideration: Reggie retains tight control and protection over his client, Shy Baldwin. The entire entourage travels to Las Vegas, where Midge’s act isn’t all that received by a non-New York audience.

This is William Jackson Harper’s first career Emmy nomination! The actor has submitted the episode “Whenever You’re Ready” for consideration: all of the friends decide to leave the Good Place and end their time. After Jason is gone, Chidi (Harper) agrees to stay based on insistence by Eleanor but he is not happy being there. Janet brings Chidi to the exit.

Dan Levy is a five-time Emmy nominee thanks to “Schitt’s Creek.” Last year he was nominated for Comedy Series for his work as a producer. He repeated that nomination this year and added bids for Comedy Directing, Writing, and Supporting Actor. He has submitted the episode “Happy Ending” for consideration: In this series finale, David is stressing out over rain that will ruin his wedding day. His dream outdoor wedding to Patrick will have to move indoors to Town Hall. Patrick books David a massage to help him relax. Alexis walks him down the aisle to the song “Simply the Best.”

This is Tony Shalhoub’s eleventh Emmy nomination. He racked up eight consecutive nominations for “Monk” in Comedy Lead Actor, winning three times. This year is his third consecutive nomination for “The Marvelous Mrs. Maisel,” having won this category last year. Shalhoub has submitted the episode “Marvelous Radio” for consideration: Abe is excited to see his article about a blacklisted friend published by The New York Times. He and Rose then celebrate the bris of Noah and Astrid’s baby.

This is Keenan Thompson’s fourth Emmy nomination. He previously competed in this category for “Saturday Night Live” in 2018. The performer has also been nominated in Original Music and Lyrics for “SNL” original songs “Last Christmas” and “Come Back, Barack.” He won the Emmy for the latter tune. Thompson has submitted the episode “At Home #2” for consideration: with an opening by Brad Pitt as Dr. Fauci, Thompson plays Diondre Cole, host of “What Up with That?,” released convict O.J. Simpson and former Boston Red Sox star David Ortiz.